Mother Dolores and about 40 other nuns cloistered at the Abbey of Regina Laudis needs millions of dollars in renovations to meet fire and safety codes, add an elevator and make handicap accessibility upgrades. Dolores Hart blonde starlet in Hollywood in the 1950s and 1960s. She shared a kiss with Elvis Presley in the 1957 Paramount film, “Loving You”   which begs the  frequently  ask question about whether Elvis was a good kisser. “I don’t know why they ask me. It’s right there on the screen to see..” replied Mother Dolores The first costar to kiss Elvis Presley on the screen but left for a life of solitude The first actress to kiss Elvis Presley on the screen and over six year, starred in films with Anthony Quinn, Robert Wagner, Jeff Chandler, and Montgomery Clift. She was the top-billing actress in MGM’s highest grossing 1962 movie Where the Boys Are. Today Dolores Hart is Mother Dolores who lives at the Abbey of Regina Laudis in rural Connecticut, where she has been a cloistered nun.

Dolores grew into a striking beauty and in 1957, at the age of 18, she signed a contract with famed movie producer Hal Wallis, and her first movie Loving You she starred opposite Elvis Presley. Decades later, Robinson who still lives LA and has never married. He continues to visit the woman he now knows as Mother Dolores. He says their love has sustained itself – albeit in ways very different from what he’d imagined as a younger man. “We have grown together. Like we would have in our marriage,” he says, “She’s my life.”

Mother Dolores, formerly Dolores Hart, is still a member of the Motion Picture Academy of Arts and Sciences. But she has not been able to vote for the Oscar winners since joining the Abbey of Regina Laudis because she cannot leave the abbey to see the films. Recently, however, she has asked the Academy to reinstate her as a voting member. She plans to watch the films on home video.

Dolores Hart at age 24 startled the film world in 1962 by leaving a thriving screen career – including two roles opposite Elvis Presley – to become a nun, has returned to Hollywood for her first visit after 43 years. Now the Rev. Mother Dolores Hart and prioress of the cloistered community at Abbey of Regina Laudis in Connecticut, she has been renewing friendships from her studio years. Why? To spread awareness about a largely mysterious neurological disorder that afflicts countless Americans, including herself, called peripheral idiopathic neuropathy. Last month, Hart testified at a congressional hearing in Washington, citing the need for research into a cause and cure for the painful and crippling disease.

Over a recent lunch at the Beverly Wilshire Hotel, Mother Dolores spoke of her ordeal with the disease. She also told of her long ambition to be an actress and what ended that phase of her life. She seems in radiant health at 67, her cheeks smooth and rosy, her blue eyes clear. She wore traditional nun’s attire, with a couple of additions: a green hand-knit sweater under the robe and a jaunty black beret.

In 1999, Hart underwent a root canal. Two days later, Hart awakened with searing pain. “I couldn’t eat,” she recalled. “When I put my feet on the floor, I couldn’t stand. My feet felt like they were on fire. I couldn’t talk. I thought, ‘This is ridiculous.’ I couldn’t understand what in the world was going on.” For six months, she journeyed from doctor to doctor, yet none could figure out what was causing her pain. Finally, a New York specialist tried changing her medicine. She gradually was able to leave her wheelchair and resume a more normal life. 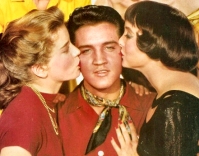 “From the age of 7, I never in my life wanted to be anything but an actress,” Hart said. When her parents divorced in Los Angeles but were constantly wrangling, she wrote a letter to her grandmother in Chicago asking to live with her. She took a train to the Windy City with a ticket pinned to her coat.

Hart’s grandfather was a projectionist at a downtown movie palace and she would accompanied him to work. Her job was to wake him from naps every 12 minutes so he could change reels. Years later, Hart was back in L.A. playing the lead in a school production of Saint Joan and an admirer asked where she had studied acting technique. She admitted her only schooling came from analyzing actors’ performances – without sound in the projection booth of a Chicago theater. A friend notified the studios of a remarkable young actress in Saint Joan and Hal Wallis at Paramount, sent a scout to check her out. He ended up recommending Hart, and a film test and contract soon followed. 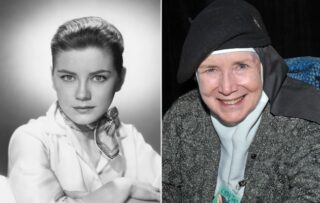 She made her screen debut as Elvis’ love interest in Loving You 1957. “I had no idea who Elvis Presley was? When I first met him, he was just a charming young boy with long sideburns.

He couldn’t have been more gracious. He jumped to his feet and said, ‘Good afternoon, Miss Dolores.’ He and Gary Cooper were the only ones in Hollywood who called me that.” Hart also co-starred with Elvis in King Creole and appeared in Wild is the Wind with Anthony Quinn and Lonely Hearts’ with Montgomery Clift. “I was never a star.

Being a star means your name is above the title. Mine never was,” she insisted. “I really loved the acting.” During the making of the The Plunderers 1959 with Jeff Chandler she looked in the mirror and heard a voice saying: “You’re really enjoying this, but you’re not going to do this much longer.” After nine months in New York with the play The Pleasure of His Company she complained to a friend that she was weary.

The friend recommended a retreat at a Connecticut monastery. Hart was hesitant but decided to go. She found a remarkable peace. She continued returning to the monastery twice a year. Back in Hollywood, she became engaged to businessman Don Robinson.

One night, she related, he asked her, “Do you love me?” She answered, “Yes, I love you.” He asked her again. Same answer. “It doesn’t sound right,” he said. The engagement was canceled, and in December 1962, she flew to Connecticut, never to return – until now. Mother Dolores is proud of one element of her Hollywood life: being invited to become a member of the Academy of Motion Picture Arts and Sciences. She is still a member and votes each year for the Academy Awards. Does that mean she sees all the nominees, no matter how bawdy? “Yes, I do,” she replied with a smile. “If you’re a Benedictine, as I am, you’re supposed to be capable of integrating anything.”

Elvis nearly suffered fatal injuries on the set of Loving You in January of 1957. He had just finished shooting a scene and had stepped back up onto the set when some instinct told him to move. Three seconds later the entire light structure crashed to the ground. Elvis would have been crushed had he not moved. The studio wanted no more accidents with their young, multi-million dollar actor.