Elvis Presley Movies: List of all Elvis Movies 1956-1976
Andy Warhol Elvis “Flaming Star” Portrait for Auction at Sotheby’s
Andy Warhol sold for 81 million  to a  private dealer.  The Andy Warhol’s Triple Elvis at 7 foot tall was taken from a publicity shot for the King’s 1960 movie Flaming Star, the painting – which features three identical images of musician in a gun-slinging pose This  biopic about the King and the  historic White House meeting is stretched far beyond its flimsy premise. Inoffensive as it is inconsequential, this  foray into filmmaking from director Liza Johnson (Hateship Loveship) is a painful disappointment from start to finish, a frustratingly safe and unimaginative effort that squanders the potential of its story.  In Johnson’s defense, there wasn’t much ripe material to bungle here. The log-line is simple: billed as an “untold true story,” the movie chronicles the two days leading up to the monumental meeting between Elvis Presley (Michael Shannon) and President Richard Nixon (Kevin Spacey). Interest in this unlikely encounter stems from an iconic photograph taken Dec. 21st, 1970, which finds Nixon ( grinning) and Presley (in a daze) shaking hands. NEW ELVIS MOVIE to be FILMED in AUSTRALIA 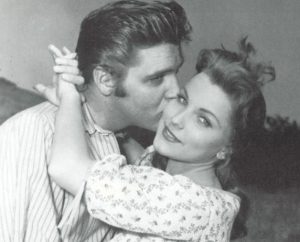 LOVE ME TENDER (Elvis’ First Movie) ( November 1956) a story set during the Civil War and Elvis plays Clint, the youngest of the Reno Brothers. On the first day of shooting, Elvis arrived with the entire script memorized – his lines plus those of the other actors. He told reporters: I wouldn’t care too much about singing in the movies. Love Me Tender was not an Elvis vehicle. He did not get top billing and he does not appear until 20 minutes into the film. He has no screen kiss but he does sing 4 songs. The movie was a major box-office smash, clearly due to Elvis appearance. It earned back its million-dollar production cost in less than a week. Faster than any previous Hollywood film, despite critics skepticism about Elvis acting ability. Watching Love Me Tender Elvis mother walked out during her sons death scene and said that she never, ever wants to be witness to that image again. It was here that Elvis met and fell in love with co-star Debra Paget

(July 1957) The success story contained in Loving You closely resembles the rise to fame that Elvis was experiencing at the time. His character, Deke is introduced as a delivery boy who discovers a natural talent for performing and soon reaches national attention as a singer. In contrast to Love Me Tender Elvis appears in nearly all the scenes of Loving You, and its the only color Elvis movie from the 50s. Elvis story is presented on-screen in Loving You as a wholesome tale of success helping to transmit the idea that he was not such a threat to middle America after all. The soundtrack is packed with songs, establishing a formula where Elvis music promoted his films and vice versa. There are many outstanding musical performances in the film, along with a number of impressive acting moments.

(3) JAILHOUSE ROCK (November 1957) This is considered by many critics to be Elvis most classic film. Coming at the height of his 50s popularity, he portrays a cynical ex-convict turned pop-singer. Elvis received $250K plus 50% from the profits of the film that grossed just under $4 million, ranking #4 for the year. Elvis’ dialogue features the latest slang & his wardrobe was cutting-edge rock-n-roll fashion. His manner and dress did much to reinforce his rebel image. Elvis had told the press when he first came to Hollywood, I took this screen test where I was real happy, I didnt like that. Then I did other one where I was mad at this guy and I liked it better. It was me. Jailhouse Rock must have been the role Elvis was waiting for.

(4) KING CREOLE (July 1958) was Elvis personal favorite. Based on the Harold Robbins novel A Stone For Danny Fisher, King Creole is a dark suspense-filled tale of troubled teenager who grows up quickly after a brush with societys worst element. The role was reportedly once offered to James Dean. Shot on location in New Orleans, King Creole boasts an all-star cast including, Walter Matthau, Dean Jagger & Carolyn Jones. Michael Curtiz of Casablanca fame was the director. King Creole earned Elvis favorable reviews as an actor, but drew the lowest gross for his 4 films in the 50s. The script is filled with complex scenes that allowed Elvis to explore a full range of his acting abilities. King Creole hinted at a movie career that was never to be for young Elvis Presley. Many believed that this impressive acting performance, he had opened the door to play additional dramatic roles. Unfortunately, this was never to be the case.

Elvis Documentaries
Elvis: Thats The Way It Is (1970) 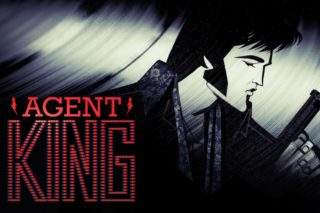 “Elvis Presley Movies …An adult animated series starring a fictional Elvis Presley is coming to Netflix this year, the streaming platform announced on Friday August 16. Netflix is partnering with Priscilla Presley and John Eddie to create Agent King, an “adult action comedy series” that positions the King as a secret government agent, moonlighting as a spy while still touring the country as a musician.

“Elvis Presley trades in his white jumpsuit for a jet pack when he is covertly inducted into a secret government spy program to help battle the dark forces that threaten the country he loves — all while holding down his day job as the King of Rock and Roll,” reads the synopsis.

Priscilla Presley stated, “From the time Elvis was a young boy he always dreamed of being the superhero fighting crime and saving the world! Agent King lets him do just that. My co-creator John Eddie and I are so excited to be working with Netflix and Sony Animation on this amazing project and getting the chance to show the world an Elvis they haven’t seen before.”

The announcement comes on the 42nd anniversary of Elvis’s death and the end of “Elvis Week,” an annual fan celebration of the King’s legacy..”