Story behind the Elvis Coffin Photo as appeared in the frontpage Nation Enquirer September 6, 1977 had a camera to sneak into Graceland 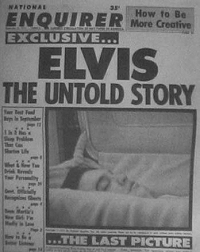 Story Behind the Elvis Presley in his Coffin Picture Elvis Coffin Picture appeared on the front-page of the Nation Enquirer September 6, 1977 National Enquirer bribed Bobby Mann to sneak a  Arco Flex Spy Camera into Graceland 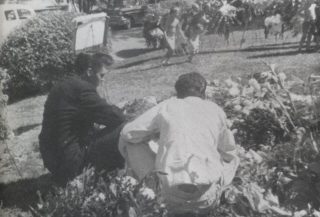 Elvis Presley’s body was embalmed then dressed in a pale blue shirt, white silk tie and white suit. Placed in a copper-platted open lid casket with his head resting of silver velvet pillow; ready for his last public appearance at Graceland

The Elvis in his Coffin Picture that appeared on the frontpage of the Nation Enquirer on 6 September 1977: Iain Calder, veteran Editorial Director of National Inquirer wrote a book, The Untold Story: My 20 Years Running the National Enquirer. Calder admits they acquired the photo from Elvis’ cousin Bobby Mann for $18,000.

National Enquirer bribed Mann to sneak a miniature Arco Flex spy camera into Graceland and take a picture of Elvis’ body. The shocking photo appeared on the cover of the Enquirer and led to a record-setting sale of 6.5 million copies for that issue. It has since become the most famous cover picture ever. The return on the investment reaped National Enquire over 1000% profit 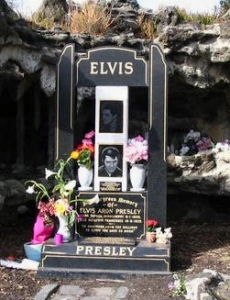 he original photo of the famous National Enquirer picture of Elvis Presley lying in his open casket was shredded during a six-year anthrax decontamination effort on the tabloid’s former headquarters, according to the newest twist in a federal lawsuit. The front-page photo, which sold a whopping 6.5 million copies in 1977, is the center of a dispute between Boca Raton developer David Rustine, who bought the contaminated building at a bargain-basement price in 2003 while it was still sealed and quarantined and John Y. Mason, whose company, Sabre, was hired to decontaminate it. In a lawsuit filed, Rustine, values the photo at $1million, said Mason held the photo hostage in a dispute between the two over the cleaning. Rustine wants him to return the image or pay for it.