Ann Margret Viva Las Vegas Elvis Affair Hit the Headlines in 1964 Ann-Margret Elvis Affair. Why They Never Married? Ann-Margret and Elvis met in 1964 while filming Viva Las Vegas. They had a brief affair until Col Parker stepped in and demand Elvis end the relationship. Long after that Elvis would always send Ann-Margret flowers in the shape of a guitar whenever she opened her show. “Thumper” was Ann-Margret’s code name when she called Graceland. Ann-Margret was Elvis’ favorites co-stars. They remained good friends for many years. Ann-Margret was his only co-star that came to Elvis’ funeral 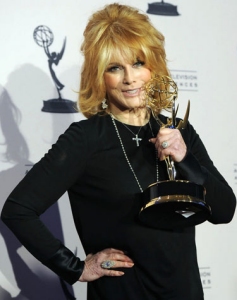 Ann-Margret collected the dramatic award for NBC’s “Law & Order: Special Victims Unit.” It was her first Emmy after six nominations. Co-Stars Christopher Meloni and Mariska Hargitay were on hand to congratulate Ann-Margret with a bouquet of flowers.  WHAT HAPPENED TO ANITA WOOD, ELVIS’ FIRST GIRLFRIEND? They dated for a while after Elvis got back to the States, but when Priscilla came to Graceland they stopped seeing each other. Today she lives in Texas and refuses to give interviews. I don’t blame her. Recently a collector paid $8,000 for a love letter Elvis wrote to Anita. She doesn’t know how the letter got to Christie’s because she burnt all Elvis’ letters before she got married in 1964.

YOU ARRANGED DATES FOR ELVIS?
Yes, I’m not ashamed of that. So many of his female fans were so eager just to meet him. I suppose in a way, I made many girls, dream come true. And because Elvis was so famous he couldn’t just go out on a normal date. Everything was arranged to the finest detail. I don’t feel bad, because it was not bad. Most of the time, Elvis would just sit around with three or four girls and read to them. I think he just needed to be reminded that his fans still loved him.

IN HER BOOK “THE INTIMATE LIFE AND DEATH OF ELVIS” DEE PRESLEY MAKES SOME ASTONISHING ACCUSATIONS. IS THERE ANY TRUTH TO HER CLAIMS THAT ELVIS COMMITTED SUICIDE?
Towards the end of his life, Elvis may have been self-destructive by taking all those drugs. But no way did he consciously end his own life. I was constantly with Elvis during the last months. Sure he was fascinated by the after-life and he did talk about what it may be like in the spiritual world… But Elvis loved life. He lived to perform on stage. The night before he died, he was planning a concert tour. Dee Presley was no longer living in Memphis at the time. All her claims are lies and based on hearsay.

Of all the leading ladies Ann-Margret stood out from the rest. An obvious choice for the perfect leading lady according to Elvis fans.  They  had a lot in common, Ann-Margret like to ride motorbikes and they often go riding on their Harley Davidson.   They were relaxed in each other company and a certain charisma between them. Even after Viva Las Vegas they kept in touch.

DEE ALSO CLAIMS THAT ELVIS WAS FORCED TO MARRY PRISCILLA ? Strange that Elvis should go to all the trouble to send for Priscilla, and have her live at Graceland, if he was not in love with her. Elvis might have been pressured by Priscilla’s parent to marry, but Elvis was not the sort of man who would do anything he didn’t want to do…