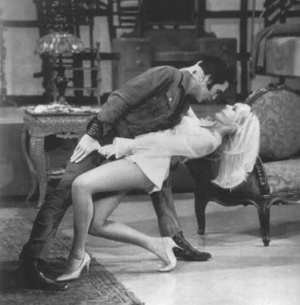 Barbara Leigh Book The King, McQueen and Love Machine Did Elvis grope for a cigarette after? What turned Elvis on? In this exclusive interview Barbara Leigh is not shy in coming forward with intimate between the sheets with the King  Elvis was the BEST KISSER of any man I’ve ever kissed.

Barbara Leigh was born in Ringold, Georgia. Ringold sits on the border of Chattanooga, Tennessee. At the age of 19 Barbara and her family moved to Los Angeles, California. There she began to work as a nurse, raising her small son. She was soon divorced and settled into the life of a single mother. Her agent Dick Clayton was well known for discovering James Dean. She studied acting with Charles Conrad. Her first commercial was for Coca-Cola.

In the book, THE KING, MCQUEEN AND THE LOVE MACHINE   Leigh reveals her three-way love affair with Presley, Steve McQueen & James Aubrey, head of MGM Studios. Proceeding the books’ release, Leigh gives ElvisPresleyNews this exclusive interview in which she was not shy in coming forward with intimate details of her time between the sheets with Elvis.

Hi Lea! Thank you for the opportunity to answers these questions for your Elvis site. First, I don’t have any pictures of E and myself as he was married and I was an upcoming “starlet” so we were very careful not to have any taken together. I wish I’d insisted on one for my personal use but I wasn’t smart enough to ask. Now to answer your questions best I can, as there are some risqué questions here (smile).

HOW DID YOU MEET ELVIS? I met Elvis in Las Vegas with Jim Aubrey when Jim Aubrey (I called him James) took me to see E’s show at the Hilton. We were invited back stage to meet the King. Jim Aubrey was the president of MGM studios and produced a film called “That’s The Way It Is” starring “E”, a documentary of sorts.

I couldn’t believe that I was going to meet him, as I’d ALWAYS adored Elvis since the first time I saw him on the Ed Sullivan show. I think I was in the 2nd or 3rd grade but I still knew enough to think that the man I was watching was special. I tried to emulate some of his moves and was quickly sent to bed.

Elvis was changing his clothes. I sat down in the middle of the room at a round table next to Chris Nelson, Rick’s wife and Jim Aubrey. The room had a lot of people mostly celebrities and friends that came to pay their respects. Jim Aubrey and Chris both got up to talk to others in the room leaving me there at the table. I had my back to Elvis’s door leading to his direct changing room. I felt a presence then turned around to see Elvis sitting in a chair staring directly into my eyes. He never looked away, not ever to acknowledge anyone but me while I was there except later when James came over to interrupt us.

He asked me my name, paid me numerous compliments and asked me if he could call me. Of course I was totally overwhelmed and said yes. At the same moment he handed me under the table a tiny, thin pencil and a small piece of paper. I quickly jotted down my number and handed it back to him. As we did this our hands touched one another, he squeezed my hands and smiled at the same time. I felt a bolt of lighting shoot through my body. I felt if I’d died right there, I would have been happy, cause I got to meet the King, and he held my hands. Jim Aubrey must have felt the connection between Elvis and me and wanted us to leave. I didn’t want to budge; I needed to be pinched to know I was alive because I was in a trance. Elvis was gorgeous, the MOST beautiful man I’d ever seen. And when he smiled the whole world lit up for me. He was gracious to James and invited us back to see his show. Elvis was and will ALWAYS be the King to me in everyway. His kindness and love for others is a legacy to us all!

DID HE TAKE IT FOR GRANTED A WOMAN WOULD HAVE SEX WITH HIM?  I don’t think that Elvis thought in the terms of every woman having or wanting to have sex with him. If he wanted to have sex with a woman she knew it and if the feeling was mutual then he acted on that. Maybe, every women he met wanted to have sex with him but I doubt it because in the end he wasn’t into sex that much but more into religion, teaching and sharing his thoughts with anyone who wanted to listen. He loved being the teacher, sharing his knowledge of his favorite books with his pupils. The King, McQueen and the Love Machine Barbara Leigh – Elvis First Love  – Ann-Margret