Buddy Holly – Elvis Presley Texas – 1955  Fair Park Coliseum  Elvis and Buddy Holly were friends who met often in 1955. Although Elvis Presley’s career developed much faster, the two men were only a year apart in age and came from similar backgrounds and family circumstances. When Elvis performed in Lubbock Texas, Holly’s hometown, in 1955, Holly opened for him and by some accounts stole the show. They hung out together after the show… in other words, they picked up women together. 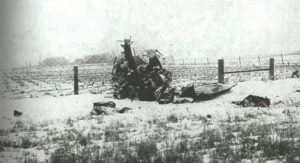 On February 3, 1959, Holly, Valens, Richardson, and Peterson were killed instantly when their plane crashed into a cornfield five miles northwest of the Mason City, Iowa airport shortly after take-off… The bodies of the all persons  were all ejected from the plane on impact, while Peterson’s body remained entangled in the wreckage. Holly had sustained fatal trauma to his head and chest and numerous lacerations and frac tures of his arms and legs. Holly’s funeral was held on February 7, 1959, at the Tabernacle Baptist Church in Lubbock

McLean’s dedicated the album American Pie to Holly.  In 2015, McLean wrote, “Buddy Holly would have the same stature musically whether he would have lived or died, because of his accomplishments. By the time he was 22 years old, he had recorded some 50 tracks, most of which he had written himself. Read More