Like most children of the 1950s, David Bowie considered Elvis Presley a mythic hero. The pair, who would go on to share a record label, RCA, in the 1970s, also happened to be born on the same day. “I couldn’t believe it,” Bowie said. “He was a major hero of mine. And I was probably stupid enough to believe that having the same birthday as him actually meant something.” 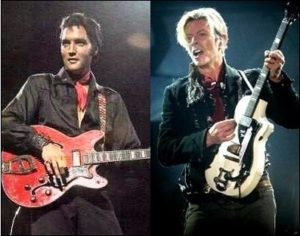 Following Bowie’s final album “Blackstar,” which was released on his 69th birthday, 8 January 2016 and the musical “Lazarus” has led back to Elvis. On New York Times Popcast, the philosopher Simon Critchley, whose book “Bowie” was released in 2014, points to the rare Elvis song “Black Star,” an alternate version of “Flaming Star” 1960 Western of the same name.

The lyrics speak for themselves

Every man has a black star
A black star over his shoulder
And when a man sees his black star
He knows his time, his time has come