David Michael Letterman (born 12 April 1947) an American television host, comedian, writer, and producer. He hosted late night television talk shows for 33 years, beginning with the February 1, 1982, debut of Late Night with David Letterman on NBC, and ending with the May 20, 2015. In total, Letterman hosted 6,080 episodes of Late Night and Late Show,surpassing his friend and mentor Johnny Carson as the longest-serving late night talk show host in American television history.

On January 14, 2000, a routine check-up revealed that an artery in Letterman’s heart was severely obstructed. He was rushed to emergency surgery for a quintuple bypass at New York Presbyterian Hospital. For a number of episodes, Letterman continued to crack jokes about his bypass, including saying, “Bypass surgery: it’s when doctors surgically create new blood flow to your heart. A bypass is what happened to me when I didn’t get The Tonight Show! It’s a whole different thing.”

Letterman was famous for his Top Ten jokes and comments. He did not spare any famous politician or actor. He continued his Top 10 for years and did include the living and the death in this case he included Elvis Presley 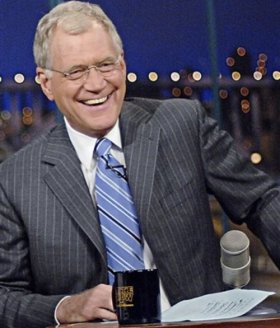 (Disclaimer: Please do not take offense- Have a sense of humor)

Top Ten Things Elvis Would Say if He Came Back Today

10. I’ve been dead 38 years, and I still look better than Keith Richards

9. What do you know? The Jets still suck

8. I’m hungry — is there are any food stuck in my sideburns?

7. I can’t believe I missed the McRib Sandwich!

6. Who’s this ‘Richard Simmons,’ and why’s he keep trying to hug me?

4. Heaven was great until that freaky bastard Tiny Tim showed up

3. That Letterman punk’s on the TV — where’s my revolver?

2. I haven’t been dead — I’ve been starring in a series on CBS

1. Lisa Marie married who? Top Ten Things Elvis Would Say if He Came Back Today

10. Maybe I should get me one of them Wonderbras

9. Sonny, Red, help me brush the dirt out of my sideburns

8. This new President and I disagree on a lot of things, but french fries ain’t one of them

7. Is there something I just don’t get about Pauly Shore?

6. What happened to Ed Sullivan, and who’s that dork using his theater?

3. All you people who thought I was alive this whole time — you morons!

2. I’d heard Lisa Marie married Michael Jackson, but this guy in the wedding photos is white

Lisa Marie talks about the Sale of Graceland