When Elvis was well established as the King of Rock n Roll in mid 1959 he recorded the song ‘My Wish Came True’ written by Ivory Joe Hunter. It is this very song that one can recognise the influence of Dean Martin voice inflection and style had on Elvis… when you compare  the  four-note opening motif  that is identical to Martin’s ‘Return To Me’ released a year earlier in 1958… Both titles having four syllables and even the key is the same. Dean Martin and Elvis Presley had a complete different generation of fans however, their signature voice style and timber and they way they deliniated the lyrics it hard to realise that none of this was commented upon or even noticed at the time. 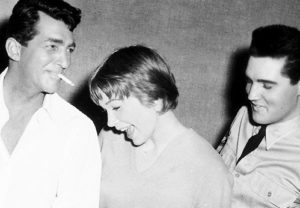 Dean Martin and Elvis Presley were in tune with one another (excuse the pun) but Dean Martin (born Dino Paul Crocetti; June 7, 1917 – December 25, 1995) was a generation removed from Elvis yet his musical influences reached far and wide. Like Elvis, Martin could not read music and never took a sing lesson – yet both were to become musical icon for their generation. An even more compelling evidence of Dean Martin’s influence on Elvis  reached even further back was when Presley  recorded  Dean Martin’s 1950 ditty, ‘I Don’t Care If The Sun Don’t Shine’ in 1955. On the other hand… Dean Martin publicly acknowledged his debt to Bing Crosby and added self-deprecatingly: “I am no singer. I can carry a tune and I have an easy style but we crooners get by because we’re fairly painless.” 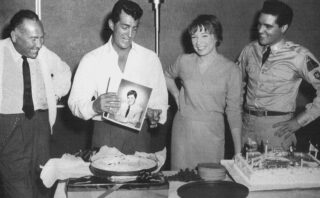 Elvis idolized Dean Martin. According to Dean Martin’s daughter, when Elvis first me his idol, he told him, “They call me the King of Rock n Roll, but you, Mr. Martin are the King of Cool.” And while Dean Martin’s and Elvis Presley’s fan bases were decidedly different, Elvis learned from and was influenced by Martin’s vocalizations, styling, and phrasing. More than that, many of the arrangements of Elvis’s songs, especially at the beginning and end of his career, borrowed heavily from the arrangements of Dean Martin’s songs. To top it all off, in 1955 Elvis recorded, “I Don’t Care If The Sun Don’t Shine,” a song Martin had sang in the 1953 movie “Scared Stiff.”