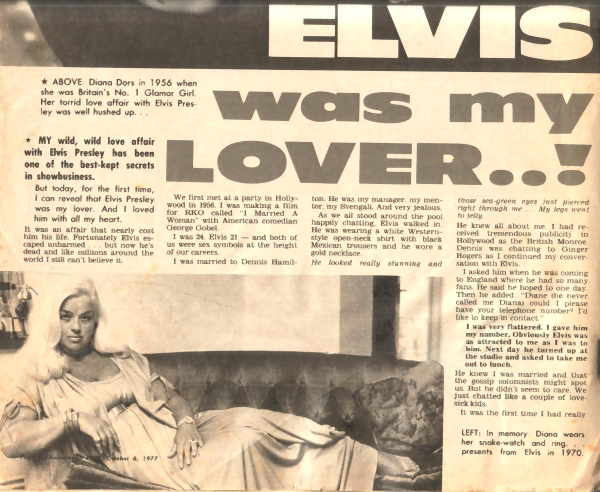 My wild, wild love affair with Elvis Presley has been on the best kept secrets in show business. But today for the first time I can reveal that Elvis was my lover. And I loved him with all my heart. It was an affair the nearly cost him his life. Fortunately Elvis escaped unharmed… but now he’s dead and like millions around the world I still can’t believe it. We first met at a party in Hollywood in 1956. I was making a film for RKO called “I Married A Woman” with American comedian George Gobel.  I was 24 and Elvis 21 and both of us were sex symbols at the height of our careers. I was married to Dennis Hamilton. He was my manager, my mentor, my Svengali. And very jealous.

As we all stood around chatting. Elvis walked in. He was wearing a white Western style open-neck shirt with black Mexican Trousers and he wore a gold necklace. He looked really stunning and those sea-green eyes just pierced right through me….My legs went to jelly

He knew all about me. I had received tremendous publicity in Hollywood as the British Monroe. Denis was chatting Ginger Rogers as I continued my conversation with Elvis. I asked him when was coming to England where he has so many fans. He said he hoped to one day. The added: “Diane (he never called me Diana) could I please have your telephone number? I’d like to keep in contact.” I was very flattered. I gave him my number. Obviously Elvis was as attracted to me as I was to him. Next day he turned up at the studio and asked to take me out to lunch. He knew I was married and that the gossip columnists night spot us. But he didn’t seem to care. We just chatted like a couple of love-sick kids. . I was the first time

I had really fallen in love and it was marvelous yet frightening experience. I problem was that I was a married woman with a successful career to continue and bad publicity would wreck it.

So we agreed on a fantastic plan of subterfuge so that we could meet without the Press – and my wildly possessive husband – finding out. I was living in a magnificent million-dollar white mansion in Beverly Hills which has a swimming poll and a pool house by the side.

That became our love-nest for those five astonishing months. Elvis would drive up in his car with smoked-glass windows and slip to the pool house without the army of servants spotting him. There , amid the orchids and garland we would make love. He was the nearest thing I’ve ever known to Heaven. The joy I felt – we both felt – was indescribable. One weekend when Dennis was away Elvis said: “How would you like to come to Mexico with me for a couple of day?” I jumped at the idea. Soon we had driven across the border with another couple and had moved into a hacienda just outside Tijuana