ELVIS PRESLEY in GERMANY Elvis in Army
December 20 1957 Elvis Presley is drafted while spending the Christmas at Graceland March 7, 1960 Elvis Presley arrived back in Memphis, after 2 years in the U.S. Army 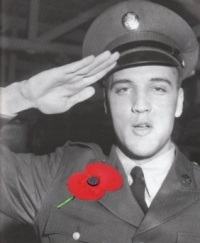 Elvis in Germany At 11th hour of the 11th day of the 11th month attained a special significance in the post-war years. The moment when hostilities ceased on the Western Front became universally associated with the remembrance of those who had died in the war.

This first modern world conflict had brought about the mobilisation of over 70 million people and left between 9 and 13 million dead, perhaps as many as one-third of them with no known grave. The allied nations chose this day and time for the commemoration of their war dead.

On 25 March Elvis reported for induction at Memphis Draft Board. He was accompanied by his parents and friend Lamar Fike. After being sworn in Elvis became Private Presley 53310761. With his fellow draftees he boarded an army bus for Fort Hood, Texas for basic training. The separation would break his mothers heart. 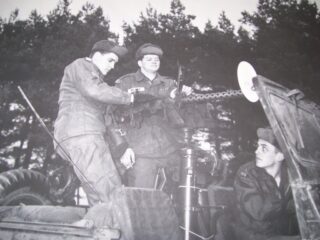 After ten weeks Elvis was granted a weekend pass. Immediately RCA took the opportunity to have Elvis taken to Nashville for a recording session that resulted in several major hits. But Elvis main concern was his mother. It was obvious that Gladys Presley was unwell, and admitted to Methodist hospital. Four days later, hepatitis was diagnosed. Elvis reluctantly returned to Army camp. By August her condition had deteriorated so badly that Elvis was given compassionate leave to begin a 24 hours hour vigil with his father.On the night of August 14, Vernon sent Elvis home for some much needed rest. At 3am the phone rang and Elvis was told that his precious mother had died of a heart attack brought on by the hepatitis. In shock Elvis rushed to the hospital.

After Elvis entered his mother ward and the door closed, witnesses remember a piercing wild despair of wails from Elvis were heard as he wept and prayed long and loud over his mothers lifeless body. Elvis didn’t want an autopsy, instead had her lie in state at Graceland. For two days Elvis just sat next to the coffin and just stared at his mother. Finally on the second night Vernon insisted that Gladys be buried. Elvis walked out to the front steps of Graceland and wept. On 16 August 1958 Gladys was buried at the Forest Hill Cemetery. The service at the Memphis Funeral Home was officiated by Rev James Hamill and the Blackwood Brothers (Gladys, favorite Gospel group) sang.

Many family members re-iterated the same sentiments, that after his mother died, Elvis changed completelyHe never had time alone to grieve. As Fike recalls,  He carried his mothers nightgown around for weeks. Wouldnt put it down for anything. Slept with it and cried all the time. He didnt seem like Elvis ever again Four week after Gladys died, Elvis was sailed to Germany.

Elvis was transferred to the Third Armored Division for posting to West Germany as part of the US contribution to the NATO forces stated there. September 26 he traveled by train to New York to join the troop ship USS General Randall, where RCA ensured that Elvis give the obligatory interviews and photo calls. Dockside whilst bidding his family farewell Elvis decided on the spur of the moment to invite his father, his paternal grandmother Minnie Presley (then in her mid 60s) Red West and Lamar Fike to live there for the duration of his posting. Elvis settled in well. He became a marksman and was promoted. His fame very waved, with an average of 10 thousand letter a week. Many letters were simply addressed “Elvis Germany” Colonel Parker would not have his boy singled out for special duties like most entertainers. He kept Elvis from entertaining the troops because Parker would have Elvis perform for free. When Bob Hope asked Elvis to join him on a Christmas tour Parker dismissed the idea with, Why should he work for the army for nothing when he gets five thousand dollars a night.

Two events during his army stint would change Elvis life forever. His father Vernon like Elvis would both meet their future wives. Dee Stanley a divorcee with three sons & Joseph Beaulieu’s 14-year daughter Priscilla Ann Beaulieu was only 14 years old, in 1959, when she met Elvis in Germany while he was in the army. The couple fell in love. In 1961 he invited her to Memphis, where she went to school. As a graduation gift he gave her a Corvair sports car. Elvis proposed to Cilla, on Christmas eve, 1966 and on May 1, 1967 Elvis and Priscilla married at the Aladdin Hotel in Las Vegas.

In the summer of 1959 on R&R Elvis decided to visit Paris. He wanted to see the sights and meet the sexy French actress, Brigitte Bardot. She on the other hand would not even contemplate a rendezvous. So Elvis and his Memphis Mafia gang hit the nightlife. Lido became their favorite haunt. Every night Elvis would let loose at the club. It got so bad that the club would have to call the hotel Prince de Galles to get the girls back over for the show. Partying nights and sleeping all days was to become a life time habit. After 2 week of heavy partying, and still fearful of flying Elvis hired a limousine at the cost of $800 to drive him back to his army barracks in Germany. Elvis liked Paris and returned twice more. He enjoyed being swamped by crowds of fans asking for an autograph because it made him feel he was still on top.

March 5 Elvis Presley was discharged and returned with his family to Graceland. After 2 years, he was free to resume his career. Colonel Parker had booked Elvis as a guest on the Frank Sinatra Timex Special television show. Greeted by Nancy Sinatra, Elvis sang a duet with Sinatra Having served his country, the older generation had a change of heart. Now, even middleclass America could not object to Elvis who had matured into a respectable all-American boy. This transformation was music to Colonel Parker as he set about recreating Elvis clean image. In hindsight, after his army stint Elvis lost his raw edge.

When John Lennon was told the the news of Elvis’ death… he reflected. “Elvis died in the army”