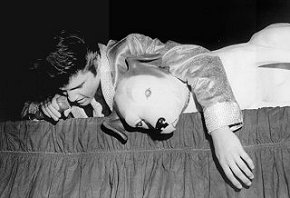 Meet the dog at the scene of the most sexually charged concert of the 50’s now worth over £5,000

Elvis Presley Concert 1957 – Elvis shocked his audience when in a burst of high spirits he rolled around on the stage floor with the stuffed animal in a highly uninhibited and provocative manner during a fast and furious rendition of “‘Hound Dog” at the inaugural concert of his 1957 California Concert Tour.   The LA Deputy Police Chief ordered the Vice Squad to instruct Elvis to eliminate any ‘sexy overtones’ from his performances or risk obscenity charges.  Even Colonel Parker took him to task.

The hound is an original RCA Nipper Dog from the California Concert Tour 1957.  It was given to Elvis Presley by RCA on the release of his huge hit ‘Hound Dog¹.  Elvis kept the dog at Graceland for many years before he gave it as a gift to his great friend, Paul Lickter, rock concert promoter and manager of the 60s groups The Soul Survivors and The Vanilla Fudge. Rebecca, bought it for £3,000 in 1997. Elvis Pets Rebecca Hooper, Nipper’s owner, is available for interviews. Rebecca is an ardent Elvis fan and as a sign of her undying commitment has had a picture of Elvis tattooed on her arm. 1957 The Principal warned all female students at the Wichita Falls High School that the school would tolerate Elvis music, the wearing of blue jeans or ducktail hairdos… My, my, my how times have changed???

UPDATE: FROM A FAN THAT WAS THERE: Dina Angus …The picture of Elvis with the RCA Nipper Dog… I was there when that photos was taken!  What a night that was! That was the first time I saw Elvis in person. My dad, bless his heart, can home one day with four tickets to see Elvis in L.A. After the show, a bunch of us went backstage, looked up and there was Elvis… hanging out the window, tossing stuff out, like his socks, shirts, etc. It was unbelievable!  We were all yelling back and forth. Elvis was just a kid himself and having a ball with the fans. I thought I would be catching a treasure any minute when my dad showed up and he was none too happy.  He grabbed me by the neck and said, Let’s go, now!” I pleaded with him but it was no use. So off we went, all of us crying.  All the way home, we screamed, cried and laughed. It was a wonderful night.  When I think back to that time and I can remember all the details as if it were yesterday.

Any Dayton criminal defense attorney today would laugh at the idea of obscenity charges against Elvis for his performance. Times have changed so much that today’s rock stars get away with much more suggestive antics than anything Elvis ever did.