Tupelo, Mississippi Elvis Birth Place The most significant landmark in Tupelo is the Presley’s two-room family home where Elvis was  born on January 8, 1935. 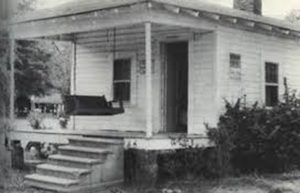 Elvis Birth Place – Tornado hit Tupelo, Mississippi  April 5, 1936 when Elvis was a mere 15 months old One of the worst tornado disasters in world history occurred in the midst of a wide-scale severe weather  that brought devastating tornadoes throughout the South Eastern United States in the spring of 1936. Just after 8pm on April 5th, a massive funnel touched down approximately eight miles southwest of Tupelo, Mississippi. Little is known about the tornados path outside the city, but several fatalities occurred in rural areas, including one person who was killed in a vehicle swept off a road (Mississippi State Geological Survey). As the tornado raced through the outskirts of town it swept away the Burroughs home, leading to the deaths of the couple and their 11 children (New York Times, 1936) Gladys always believed Elvis was an identical twin (his brother Jessie Garon died at birth) and raised Elvis to believe this as well, which led him to comment throughout his life that he always felt emptiness in his life where his brother should have been. This trauma bonded Elvis and Gladys. Mother and son were devoted to each another to the extreme. The Presleys were poor as any white Southerners could be. Vernon worked as a sharecropper, Gladys at the Tupelo Garment Co as a machine operator. Vernon was not an ambitious man, considered lazy, and for a time spent 18 months at Parchman Penitentiary for cheque forgery. Elvis Presley birthplace: Tupelo was a dirt-poor town in the deep South. The sharecroppers and laborers, whites and blacks alike, all sought refuse from their misery through religion. It was in church, Elvis first heard music, Gospel music, and this Southern-style expression in song would remain the strongest influence on Elvis’ music till the very end. Although pitifully poor, Elvis’s mother saw to it that her only surviving child would have the best of what little money could buy. For his 10th birthday, she bought him a guitar. At first little Elvis objected – he had wanted a cap gun. Maybe that’s the reason in later life, when money was no object Elvis had a fascination and collected firearms. Later, with the help of uncle Vester, Elvis learned to play the guitar, well enough to accompany himself singing OLD SHEP. A family friend, Mississippi Slim, encouraged Elvis’ guitar playing by teaching him additional chords – sharps and flats. According to Slim, Elvis was an attentive student, but was not a quick learner. Name: Elvis Aron Presley: born in Tupelo, Mississippi at 4:35 AM January 8, 1935 during The Great Depression.  Times were hard everywhere, but  especially in the rural South. The national average annual salary was $1,368 unemployment was 25% Milk was 14cents a quart & bread 9cents a loaf. To escape the dire circumstances people amused themselves with board games like the new Parker Brothers game Monopoly, and by reading mystery novels by such  writers as Agatha Christie and Raymond Chandler.  Another pastime was listening to the radio. On the radio in the 1930’s were comedians Jack Benny, George Burns/Gracie Allen, and Fibber McGee and Molly. Dramatic radio serials featuring The Lone Ranger, The Green Hornet &The Shadow kept listeners enthralled. The music was that of the Big Bands were Benny Goodman, Duke Ellington &Tommy Dorsey as well as the folk songs of performers Woody Gutherie. George Gershwin, Cole Porter & Irving Berlin were the songwriters of the time.  Popular Country singer Jimmie Rodgers had died in 1933. The “singing cowboy” Gene Autry was making movies and Len Slye (later world famous as cowboy star Roy Rogers) and the Sons of the Pioneers were becoming well known. Tupelo, Mississippi Elvis Presley’s birthplace now features a permanent reminder that the singer was a kid before he was king. The 350-pound bronze statue of a 13-year-old Elvis was unveiled to coincide with the 67th anniversary of the singer’s birth. Museum at Elvis Presley’s birthplace in Tupelo, Mississippi, reopened to the public on Monday 8 January 2007, on what would have been Elvis’ 72nd birthday. The museum’s $250,000 renovation was completed last week.  The statue was created by sculptor Michiel Van der Sommen, at a cost $50,000, which was paid by the Tupelo Visitors and Convention Bureau. Henry Dodge, chairman of the Elvis Presley Memorial Foundation, said the idea of portraying Elvis as a young teen-ager was first suggested by a fan.  “We chose 13 because that was the age his family left and went to Memphis,” Dodge said. “He lived here until he was 13 and nobody can really take that from us.”