Exhumed – Elvis Body Exhumed.  Where is Elvis Presley really buried? Forty  years after the untimely death, August 16, 1977 the secrets surrounding Elvis’ grave site is still to be laid to rest.

Originally Elvis was buried in Forest Hill Cemetery In Memphis. Later Elvis Presley’s  coffin was exhumed and brought to Graceland by Vernon Presley, Elvis’ father. There were two reasons for exhuming Elvis’ body and relocate it to the Meditation Garden at Graceland. One night Vernon Presley got a call to say that they are about to rob Elvis Presley’s Cript at Forest Hill Cemetery. 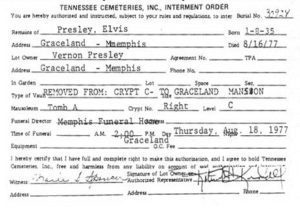 After the threat Vernon sought with efforts of the Major of Memphis to move Elvis Presley’s coffin in the dead of night and reburied in the garden area of Graceland and ensure that  Elvis Presley remains would be safer in a more protected environment. This later became  financially advantageous to have Elvis buried in Graceland as an added attraction after the Graceland Mansion which was open to the public in 1982. At the same time Vernon Presley had his wife and Elvis Presley’s mother’s body at Graceland next to her beloved son 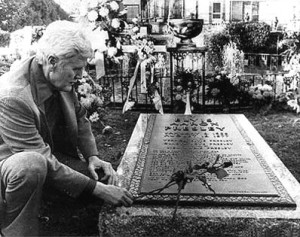 It was a routine autopsy to discover the cause of death. We did what was necessary with the procedures that were available at the time.” Although Elvis’ major organs such as his brain and heart are still in storage at the Baptist Memorial Hospital in Memphis, Dr Francisco believes that any further investigation and post-mortem analyses would not reveal any revelations surround the cause of death. When Elvis’ father Vernon Presley received the news that a cocktail of drugs prescribed by Dr George Nichopoulos had been the root cause of death, he panicked and bribed officials to keep the document a secret.  Vernon who died of heart failure, June 26 1979 can no longer bear witness to the cover-up.   Elvis Coffin Photos