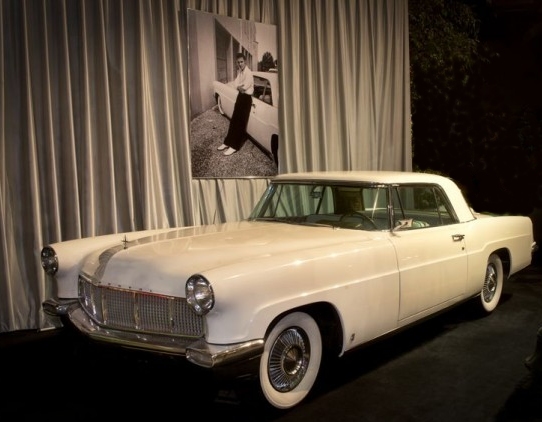 In August of 1956, Elvis purchased the Continental Mark II in Miami with proceeds from his recent tour. He needed a new daily driver after fans had written all over his other Lincoln with lipstick. The new car quickly became one of Elvis favorites and he even drove it to New Orleans for the filming of his popular movie, King Creole.

Elvis 1965 Cadillac Eldorado convertible for sale on eBay: Finished in over 40 coats of hand-rubbed rich casino  gold opalescent paint with specially designed gold interior by Elvis Presley himself. This unique motorcar was designed and created by both Elvis Presley and the King of Customs himself, George Barris, who happened to be one of Elvis’ closest friends. This great piece of motoring history has many unique features and is truly a one of a kind creation. Where there have been many cars that Elvis has owned, this is, in fact, the only car that Elvis Presley ever designed. This was his dream Car

Elvis was known to have gifted cars to complete strangers

The Cadillac was Elvis favorite make of car, whether it be a Pink Cadillac or a Black Cadillac.  Elvis included his Cadillacs in song. His Black Cadillac is mentioned in the lyrics Santa Claus is Back in Townwhile his Pink Cadillac is mentioned in Baby Let’s Play House.  Elvis’s love  affair with the 1955 Fleetwood Cadillac was well documented and his reputation for collecting cars was well deserved. Though he owned and donated many different kinds of cars to friends and total strangers, this 1955 pink and white Cadillac Fleetwood (originally blue in color) is said to have been his favorite and the one car he never sold or gave away.

Elvis bought the Pink Cadillac  for his mother (although she never drove) in July 1955. According to Art, who lived next door to Elvis in Lamar St in 1955, he made the pink paint for Elvis and is the only one who knows the formula, he named it “Elvis Rose.”

On September 2, 1955, $1,000 damage was caused to Elvis’ Pink Cadillac in an accident in south of Texarkana. The top of the car was re-painted white in 1956. Today the PINK CADILLAC has become the most famous Cadillac in the world. The Car Elvis Shot ? – Elvis Harley Davidson