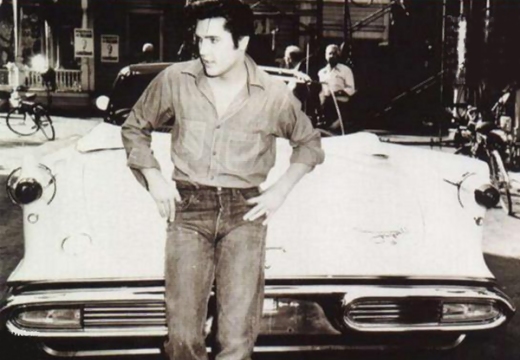 For his 18th Birthday 1953 Elvis father Vernon Presley purchased a 1942 Black Lincoln Zephyr for fifty dollars which was a lot of money for a family of very modest means. When his mother eyed his classic car collection of four Cadillacs, two Limousines, a Messerschmitt sports car and Harley Davidson motorbike she said, “Elvis has always been crazy about Cadillacs. Why, I believe he was only nine or ten years old when he learned to drive. In fact, we learned together.”

During the war, she explained, when Vernon Presley worked in Memphis and they were alone except for his weekend visits. “If we were to get around any, it was up to me to do my own driving.” “Elvis drove around the yard first, when I was ready to venture onto a back road to practice, I’d drive a mile, then Elvis would drive a mile.” 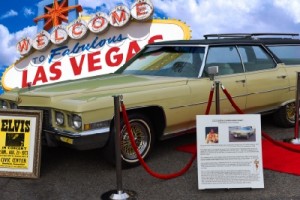 His driving gave his mother one tense moment. “We were parked facing a store and Elvis mistook forward for reverse and dropped the clutch. The car shot right up onto the curb and I thought we were going to go through the store window. But Elvis kept his head and stopped me just in time”.

He gained his next driving experience after the family moved to Memphis, and went back to Tupelo for visits. Vernon recalled, “The accelerator of that old Pontiac we had was so stiff my foot would get tired, so Elvis would sit in the middle and feed the gas while I steered.”  “Elvis was almost seventeen when he went for his driver’s license,” his mother continued. “He borrowed my brother Travis Smith’s car – that was newer – to take the test and he had no trouble.”  His father added, “After that there was no keeping him away from the wheel. I remember once when we were living in Lauderdale Court. It was a hot night and everyone was outside.

His first date was without benefit of a car. “He was 14 years-old, I guess, and usually he came home from school about three o’clock. But this day he never showed up. I was that worried I was crying by the time his father got home.” “I went looking for him,” says his father.

“I asked around until I learned he’s walked Bonnie Jean Davis home from school. That’s where I found him, just fixing to sit down to have supper with the Davis family. It wouldn’t have looked good to break that up, so I went home and told Gladys to quit crying – he was all right. He was a senior when he participated in the Road E O and had his picture taken changing a tyre. When he came home, he told us that he had lost the race because of his sideburns. He was disappointed; cause he just didn’t like to lose at anything. 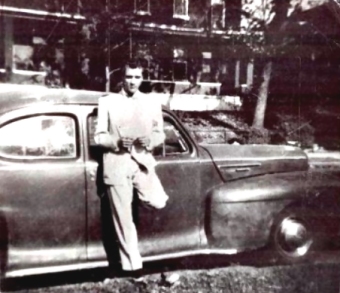 Former manager, Bob Neil recalled at the time, “With him playing shows in all sorts of different places, good transportation was a necessity, so I helped him arrange finance. Nothing but a Cadillac would suit Elvis, so we located a good used one. The first night he had it he was so happy he sat up all night at a hotel-room window, just looking at it.” That car, unfortunately, brought Elvis two near death disasters.

Gladys recalls, “I had the strangest feeling all that day, and when Bob Neal came to our door, my knees I went right from under me. I said right away, “Something’s happened to Elvis.'” “Not to Elvis,” said Bob, “but to the car” Bob said. Apparently, the car had caught fire and the hand brake had dragged. A truck driver driving past had noticed and had blown his horn but Elvis paid no attention.During his lifetime Elvis was known to have donated at least 25 vehicles to family, friends and complete strangers. He even paid the Memphis Car Insurance

After another car indicated the same thing, Elvis realised something was wrong. By that time, the whole rear of the car was ablaze. A bus stop by and all the passengers tried to help but there was nothing anyone could do. Elvis fought the fire until someone pulled him away just before the gas tank blew up. Hitchhiking to the next town Elvis hired a private plane to take him on to his show.  That day Lady-Luck was on Elvis’ side. As the plane landed a tornado hit the town and tore up most of the other planes at the airport. Heartbroken Elvis returned to Memphis.  All he could do for days was walk around repeating, “Man I loved that car.”

Elvis replacement car became the now famous pink Cadillac that he bought for his mother. When on his first television interview Wink Martindale asked why he had so many cars, Elvis got bashful and stammered, “You might say cars are my hobby.”

In early March, 1955 Elvis had bought his first Cadillac. It was a pink and white 1954 Cadillac  and provided transportation for Elvis and the Blue Moon Boys for about three months. The car went up in smoke when a brake lining caught fire, on the road between Hope and Texarkana, Ark. in June, 1955. Note the roof racks in the pictures below, they were used to carry the Blue Moon Boys equipment.

A Mercedes-Benz, once owned by Elvis Presley, was sold by Bonham’s on Dec. 7, 2010, at  Surrey, England, for £80,700 – US$187,390. Restored to a very high standard, the rare piece of Elvis Presley history attracted a great deal of interest internationally. It ultimately sold to a bidder in Germany.

Elvis’ 1970 Mercedes-Benz 600 Saloon Limousine in powder blue was one of only a handful of cars that the singer registered himself, and one of two 600 Mercedes that he owned. Presley owned the car for two years before gifting it to one of his friends, James Leroy Robertson. The consignor to Bonhams sale purchased it in 2005 from Robertson Motors Memphis. At that time, the Elvis Presley fan club attempted to stop the cars export to the UK, as they considered it a national treasure that should not leave the USA.