Items produced during Elvis lifetime in the 1950’s and 1960’s have an established value. However, Elvis items produced after Elvis death in 1977 by EPE Inc has no such qualifications. At present are regarded simply as novelty items. That’s not to say, in 40 years they will become valuable collectible items

Elvis Presley’s Gold Piano  has join Hard Rock’s priceless collection of memorabilia that including  clothing & instruments from legendary stars like The Beatles & Jimi Hendrix. The  grand piano was  originally purchased for his mother Gladys in 1955 and installed in his home on Audobon Street. The piano was placed into storage after his mother’s death, until Priscilla Presley decided to adorn the piano in 24-karat gold-leaf  as a gift for the couple’s first wedding anniversary. The piano can be seen at Seminole Hard Rock Hotel in Tampa.

I offer an Elvis Collectibles Valuation Service for US$45.00
Once payment has been made please email me images of the Elvis item you wish to have valued. Thank You 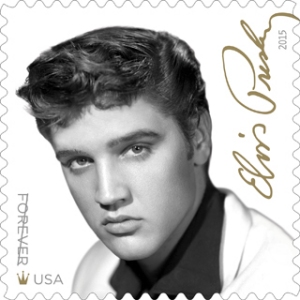 The Postal Service previously honored Presley on a stamp in 1993. The Smithsonians National Postal Museum calls that stamp the most popular U.S. commemorative stamp of all time. This 2015 issued stamp features a 1955 black-and-white photograph of Presley taken by William Speer. In the bottom left corner, between the words Forever and USA, is a small gold crown, a nod to  The King of Rock n Roll.  Presleys signature, in gold ink, also is featured along the right side of the stamp. 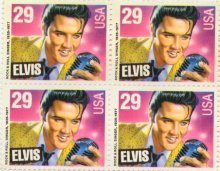 The previous Elvis stamp in 1993 became one of the US Postal Service’s most talked about ever. In a successful bid to generate a buzz, the Postal Service asked the public in 1992 to vote between images of a dashing young Elvis and an older, chubbier one.

Where once Elvis Collectibles & Elvis Presley Memorabilia was limited to exclusive auction houses, today eBay plays a major role for the serious collector, hobbyist or the avid Elvis fan.

The most significant posthumous Elvis collectible item has to be the USA stamp The history of Elvis collectibles & Elvis memorabilia began with Colonel Parker who sought to cash in on the lucrative demand. In 1956 alone Elvis had five number 1 singles, and so great was the popularity of his records that RCA was forced to use the manufacturing facilities of other record companies to meet the demand . When Col. Parker realised that fame could translate into a ‘celebrity bonanza’ he established Elvis Presley Enterprises Incorporated. What followed was an avalanche of Elvis merchandise that left teenagers mesmerized by the appearance of Elvis’ name and likeness on every imaginable item. Everything from garments, costumes jewelry, lunchbox, to board games. Elvis dolls were made available just for the growing legion of female fans. By 1957 Elvis merchandising grossed  25 million dollars. In 2017, Elvis’ popularity has remained undimmed and an ever-growing army of fans & collectors seek the potentially valuable icons of the past. Fifty years later nothing has changed. Elvis Watches are proof enough that Elvis collectibles still sell

If you are looking to become a serious investor of Elvis collectibles, the novelty retro items, and vintage toys and clothing produced red in the mid 1950’s reap the best value for money and have the potential to greatly increase in value.