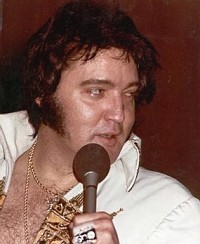 he King’s Decline – November 1972, Elvis invited Linda Diane Thompson (runner-up Miss Tennessee) to move into Graceland. Almost immediately Linda began to redecorate the mansion. The legacy of her efforts can still be seen in the TV room, where Elvis later recorded From Elvis Presley Boulevard, Memphis Tennessee  because he was too lazy to travel to the Nashville studio.  October 1973 Linda Thompson spent 2 week with Elvis at Baptist Memorial Hospital while he recuperated from pneumonia. Christmas that year Elvis gave Linda expensive jewelry which led over a millions dollars worth by the end of their courtship. By November Linda and Elvis relationship was folding, when she left Las Vegas only after two nights. They finally broke up in 1976 because of Elvis drug problems Linda claiming to the press, It was a nice abnormal life we had together.  Linda reappeared to attend Vernon Presleys funeral who died (of a broken heart) June 26, 1979

uring the early 70s Elvis continued to tour, but soon fell victim to the same artistic atrophy that had bedeviled his celluloid career. Rather than re-enter the studio to record fresh material he relied on  patchy live albums that saturated the marketplace. What had been innovative & exciting in 1969 swiftly became a tedious routine and an exercise in misdirected potential. Elvis’s final years were a sordid slump into drug dependency, reinforced by the pervasive unreality of a pampered lifestyle in his fantasy home Graceland. The dissolution of his marriage in 1973 coincided with a further decline and an alarming weight increase. Remarkably, he continued to undertake live appearances, covering up his overweight frame with brightly colored jump suits and enormous, ostentatiously jeweled belt.

August 16 – Shortly after midnight Elvis returns to Graceland from a late-night visit to the dentist. Through the early morning of the 16th he takes care of last-minute tour details and relaxes with family and staff. He is to fly to Portland, Maine that night and do a show there on the 17th, then continue the scheduled tour. He retires to his master suite at Graceland around 7:00 AM to rest for his evening flight. By late morning, Elvis Presley is dead. In a matter of hours the shock registers around the world. The official cause of death was a heart attack. In the weeks following his demise, his record sales rocketed and Way Down to number one.

“A Memphis Fire Department ambulance from Engine House 29 at 2147 Elvis Presley Boulevard responded to the call at 2:33 pm and by 2:56 pm had taken Presley to the emergency room at Baptist Hospital, seven miles away from his Whitehaven home” “It was just a routine call. Someone was having difficulty breathing at 3764 Elvis Presley Boulevard. Such calls had come in before when people had collapsed on the street as they waited to catch a glimpse of their singing idol. The call was received by the normal procedure, said Charlie Crosby, an emergency medical technician. We only knew it was his house.” – The Commercial Appeal

Indianapolis, Indianas Market Square Arena. This will turn out to be Elvis’ very last concert performance. (Torn down in 2001)  Elvis tours in concert. Shows on June 19, 20, & 21 were recorded by RCA for an upcoming live album and videotaped for an upcoming CBS-TV television special. (Footage from the show on the 20th is not used in the special.)  Called Elvis in Concert. It first aired on October 3 after Elvis death in August. Tour of Graceland 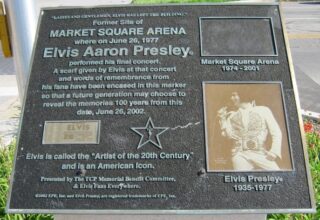 Market Square Arena was demolished in 2001 and turned into  a parking lot. However, fans together with the city county erected a  memorial marker at the site  to commemorate the historical  venue of  Elvis Presley’s final concert 1977.