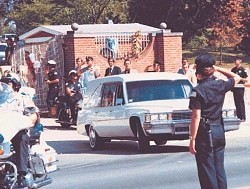 August 16, 1977 was a day that, much like the day that President Kennedy was assassinated, everyone remembers where they were and what they were doing when they first heard the news – Elvis Presley‘s funeral two days later became a media circus. With thousands of fans arriving in Memphis to pay their respects to the King at Elvis’ Graceland.

August 17, 1977 At 3pm the doors of the Graceland mansion were opened for the public viewing of Elvis Presley. The mourners ranged from pre-teens to middle-aged and older men and women. The crowd outside the Graceland Gates was estimated to be hundred thousand despite the stifling heat. The line of mourners file past Elvis’ coffin until 6.30pm when it was decided the heat and humidity would take its toll on Elvis’ body.

August 18, 1977 Elvis funeral service at Graceland was followed by a  ceremony and burial. A motorcade of 14 white Cadillacs with Elvis hearse  lined the streets from Graceland to Forrest Hill Cemetery. 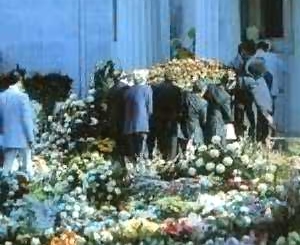 Jackie Kahane gave the eulogy . Jake Hess and the Statesmen sang “Known Only to Him” James Blackwood and the Stamps sang, “How Great Thou Art” and gave a melodious rendition of “Sweet, Sweet Spirit” an “His Hand in Mine” Bill Baise of the Stamps sang “When It’s My Turn” and Kathy Westmoreland sang a tearful  “Heavenly Father”.

Elvis was laid to rest in a mausoleum alongside his mother Gladys. Under heavy guard, a simple reverent ceremony was conducted. At the time of his death Graceland was valued at $500.000. President Jimmy Carter’s message to the nation was; “With Elvis Presley a part of our country died as well.” Others said that the American Dream died with Elvis. There is no doubt that with Elvis’ death rock n roll music died and the world would never be the same again. 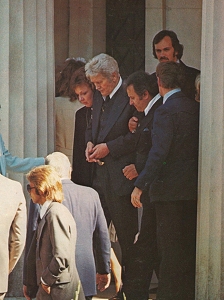 Just after 2pm Tuesday, August 16, 1977 Ginger Alden found Elvis, face down, unconscious, on the floor in the bathroom at Graceland. Clad only in blue top and yellow pyjama bottom. Elvis was crouched over.His face dark and bloated. By 3.30pm Elvis had been pronounced dead after frantic ambulance ride to Baptist Memorial Hospital where an unprecedented number of specialists battled to save his life. The official verdict was death by heart failure. The hospital called Vernon Presley to tell him that his son was dead. Joe Esposito was going to announce the death, but was to  overcome with grief. Half an hour later, on the steps of Graceland a grief stricken Vernon announced to the world: “My son, Elvis is dead…”