Gold Lame Suit is prue mid 1960s style. On trend with all that is hippy and 60s psychedelic. The Gold Lame Jacket Elvis Presley Gold Lame Gold Lame Before Elvis wore Jumpsuits he wore Gold Lame Today The Lansky Store The Clothier to the King Elvis’ favourite Memphis Menswear  is now avails all Elvis fans an opportunity to buy replicas of Elvis street wear online or from their store at the Peabody Hotel in Memphis

Hank Williams was Nudie best customer. And it was Nudie again who designed jumpsuits for Elvis impersonators Alan Meyer. Recently when doing a cleaning after Nudie Rodeo Tailors closed their doors, this wonderful piece of Elvis memorabilia was discovered. 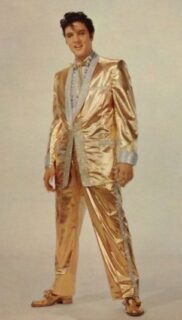 Gold Lame Suit: Elvis wore this complete lame tuxedo only once and it was featured on the 50,000 FANS CANT BE WRONG album cover. Although compared by Elvis jumpsuit era of the 70s Elvis was reluctant to wear the full lame gear, and performed only once more wear only the jacket Note: had Elvis foot size grew one size bigger, and his waist by only 2 inches after ten years. A far cry from his final physical condition just before his death in 1977.