Elvis Grammy Awards Elvis Music Elvis Albums Elvis Won 3 Grammy Awards Elvis had 149 songs appear on Billboards 100 Chart in USA. 114 were in the top forty, 40 were in the top ten and 18 went to number one. Elvis number one singles spent a total of 80 weeks at number one. He has also had 90 charted albums with ten reaching number one. These figures are only for the pop charts in USA only. Elvis Presley was also a leading artist in the USA country, R&B, and gospel charts

Elvis’ music will always remain his most beloved legacy Appreciated by the 50’s baby-boomer generation The 60’s flower power generation. The 70’s disco generation. The 80’s “greed is good” generation. And all the rest to come Elvis Presley is the best-selling solo artist in U.S. history Elvis charted more songs on Billboard’s Hot 100 than any other artist. Elvis spent more weeks at the top of the charts than any other artist. Elvis had the greatest number of consecutive #1 hits. (10) Elvis is second only to the Beatles in total of #1 hits. (18) It took Eric Clapton 20 years to win 6 Grammy Awards. It seemed to be no different for Elvis.

Elvis Presley the King of Rock and Roll, and Bebe Ruth the Great Bambino, are among those set to receive the highest honor that a president can bestow on a civilian- Medal of Freddom 2018. See video of the presentation below. One begs to ask why Jack Soden stood in for Elvis Aron Presley and not a member of the family… Lisa Marie Presley. It has been suggested the reason that no Presley family member attended to receive the Freedom Medal is that they are all anti-Trump. Politics before honor my my.

The White House announced Saturday that President Donald Trump will award the Presidential Medal of Freedom to seven people next week. The list, which names three posthumous recipients, includes sports and entertainment legends such as Babe Ruth and Elvis Presley as well as political and charitable luminaries such as philanthropist Miriam Adelson, Utah Republican Sen. Orrin Hatch and the late Supreme Court Justice Antonin Scalia. 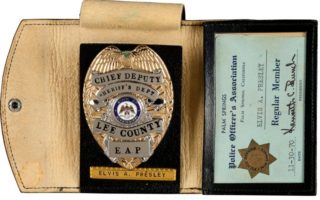