Elvis Guitar Collection All Elvis Owned Gibson Guitars – Elvis  Guitars has become synonymous with rock n rock. The preferred musical instrument for a legend of rock icons Throughout the years, Elvis had a string of Gibson guitars he used on stage 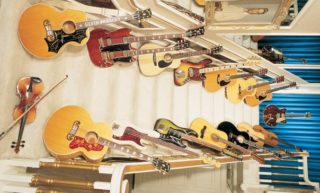 Guitars – Scotty Moores 82-year-old fingers have no more music left in them. Arthritis has invaded the hands of the man Rolling Stone magazine rated 29th in its 2011 list of the 100 Greatest Guitarists of all time, ahead of legends such as Mark Knopfler, Joe Walsh, Muddy Waters, Slash, Dickey Betts, Bonnie Raitt, Carl Perkins, Roger McGuinn and Paul Simon. Scotty Moore was Elvis Presleys original lead guitar player who laid down the licks on classic early hits such as Hound Dog and Jailhouse Rock. He was also Elvis close friend and worked as his manager for a short time. Its been about seven or eight years since I was able to play, Moore says by phone from his secluded home outside Nashville. I had stopped playing professionally several years before that, but Id still play once in a while for my own enjoyment … just whatever song came to mind, really. Sure, I miss it. But the arthritis came on gradually, so I knew the day would come that I had to deal with it.

Les Paul, guitarist had Gibson Guitar brand named in his honor. The Les Paul Guitar is the most sought after guitar by most famous rock bands 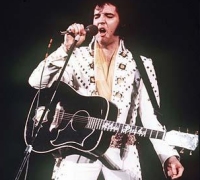 lvis Presley’s Gibson Doveguitar was played by ‘The King’ during a performance at the Las Vegas Hilton in December 1976. Elvis gave the instrument to his bodyguard Sam Thompson in January 1977. On the back of the guitar is some plastic residue where the belt on Elvis’s jumpsuit melted because of the heat of the stage lighting. Described as ‘one of the most significant guitars to ever reach the market’, the Elvis guitar  expected to sell for up to US$500,000.

Les Paul, guitarist who had Gibson Guitar named in his honor and who changed the course of music with the electric guitar and multi-track recording and had a string of hits, died August 13, 2009. He was 94. As an inventor, Paul helped bring about the rise of rock ‘n’ roll and multi-track recording, which enables artists to record different instruments at different times, sing harmony with themselves, and then carefully balance the “tracks” in the finished recording. 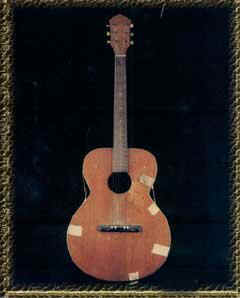 Elvis aged 10 wanted the rifle for his birthday, but his mother told him he couldn’t have it, and that was her final decision. So he cried some more. But finally he plunked on the guitar, because it was that or nothing. Bobo(the store owner of Tupelo Hardware) told Elvis.. “If you play that, you might be famous someday”

“Well, we know what happened.” In the years between that fateful $7.75 sale and Presley’s first brush with fame, Booth heard from the youngster from time to time. Although Elvis spent much of the rest of his childhood living in Memphis , Booth says, he often came back to play in Tupelo as an adolescent and young adult. “He came into the store one day looking like he’d slept in his clothes for a week,” says Booth, who was also unimpressed with the young man’s longer, “greasy-looking” hair. “I walked over and waited on him. He bought a couple guitar picks and left, and I thought he was just some crummy looking guy who had come in.”

“I turned to an employee and said, ‘ Leon , did you see that guy?’ He said, ‘Oh, that’s Elvis Presley. That boy can really sing-I believe he’ll make the big time.’ About a year and a half later, he was on his way up. You couldn’t turn on the radio without hearing requests for Elvis songs.” 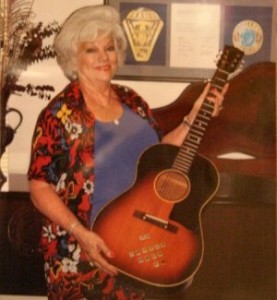 Elvis Guitar Owned by Anita Wood  Thirty years after Elvis’ death, Booth still marvels at the impact of the local boy who made good. In fact, Booth feels that impact every day inside his store. “It’s unbelievable,” he says. “People come in to see where he bought his first guitar. Every network & media organization in the world has been here and filmed the place.” An occasional challenge is doing business with the extra traffic attracted by the store’s place in history. The building was especially crowded this summer, during the week of the 20th anniversary of Presley’s death. Anywhere between 30 and 40 people were continually “milling in and out” of the store throughout that period, Booth says – The site of a sale that would help alter popular music, Tupelo Hardware is now one of most frequently visited sites for fans who come to town to trace Elvis Presley’s roots. 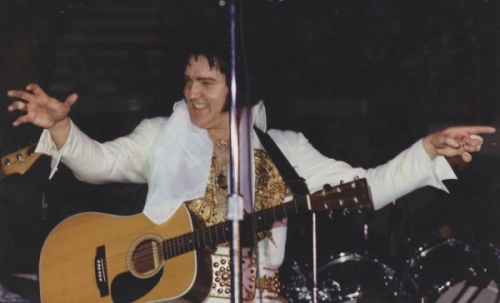 National Music Museum at the University of South Dakota in Vermillion, will have on display a slightly smashed acoustic guitar played by Elvis Presley on his final tour in 1977. The Martin D-35 guitar was tossed aside by Elvis during his St. Petersburg, Florida concert after suffering a broken strap and string. A unknown Memphis guitarist donated the item. When the strap and at the same time Elvis broke a string… in frustration… Elvis tossed the guitar straight up in the air and it come down and smashed. Elvis Guitarists: Scotty Moore – James Burton  – Elvis Musicians that are still alive – Who will play Elvis in new Elvis Movie?