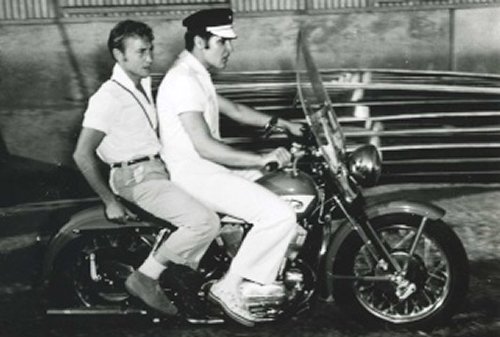 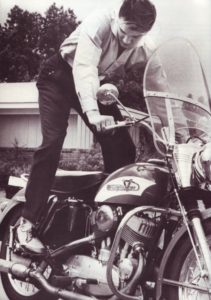 Elvis could stroll to the garage and decide which motorbike to fire up for a ride. He had a choice. A vintage Harley Panhead or a Honda Dream, or perhaps a Triumph bike. Most likely it would be his favourite Harley-Davidson Dresser. “Most loved bike Elvis owned was the Harley Dessert. They were police-type bikes. Bigger and close to the ground just what Elvis loved,” says Ron Elliot, the proprietor of Super Cycle, a Memphis motorbike shop that took care of all Elvis motorcycle business.

Roustabout 1964  Elvis plays Charlie Roger a motorcycle rider trying to earn a buck singing in small clubs. He gets a temporary job at Maggie Morgan’s Carnival while his bike is being repaired.

Stay Away Joe 1968 Joe Lightcloud (Elvis) returns home after a successful run on the rodeo circuit. He intends to raise cattle with his father (Burgess Meredith). Elvis is slim, tanned and charming. Try to forget the scene in which he sings to the bull!  Elvis Cars