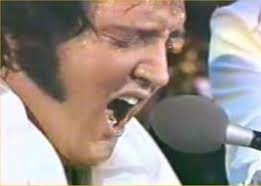 Raw footage of Elvis’ last concert was auctioned in Santa Monica, California, on July 26th and 27th. The four-hour collection includes 27 songs and features candid hallway shots of Elvis with his girlfriend at the time and father in addition to intimate dressing room scenes and other moments leading up to the performance. It was shot on Elvis’ final tour for a one-hour CBS-TV special, Elvis in Concert. Elvis Presley Enterprises had chosen not to release the footage from the final concerts because some scenes showed Presley clearly ill and unstable, though bootlegged versions have circulated for years. It is not known if the footage contain material not already seen on pirated versions. The four-and-a-half hours, even in black and white, would certainly be integral to those intent on deciphering the last days of the life of Elvis Presley

Elvis is on top of the UK charts with a collection of songs backed by Britain’s Royal Philharmonic Orchestra. If I Can Dream gave Elvis his 12th chart-topper in Britain, meaning Elvis now has more UK #1 albums than any other solo artist. It puts him level with Madonna in 2nd place for the most UK number one albums overall, The Beatles having notched up 15 #1 albums.

Recorded at Abbey Road Studios in London, the 14-track album features Elvis’ most dramatic original performances with new accompaniment, including a scintillating duet with Michael Bublé on “Fever”, and special guest appearances by Il Volo and Duane Eddy. The acetate record of Elvis Presley’s 1954 track went under the hammer at Whyte’s auctioneer’s in Dublin, Ireland on Sunday, alongside Buddy Holly, Van Morrison and U2 memorabilia. The record eventually sold to an Internet bidder for a staggering $88,000.

The 78rpm was recorded on July 5, 1954, by a young and unknown Presley, who had walked into the offices of Sun Records and the Memphis Recording Service in Memphis, Tennessee, owned by Sam Phillips. Elvis Grammy Awards   It is the only known surviving promotional copy of his first commercial recording and is considered to be one of the most important foundation stones of Rock n Roll.

Elvis sang a fast version of That’s All Right (Mama) by Arthur Crudup which Philips recorded on an acetate record and sent to a local radio station disc jockey, who agreed to play it. Whyte said it was the first time Presley had hit the airwaves and the station was inundated with phone calls and reportedly had to play it over 14 times during the course of the show.

ELVIS MUSIC SONGS: Elvis Presley is the best selling solo artist in USA history – Elvis charted on Billboard’s Hot 100 with (149) – Elvis spent more weeks at the top of the charts with (80) – Elvis had the greatest number of consecutive #1 hits (10) – Elvis is second only to the Beatles in total of #1 hits (18)

With one billion record sales to his name, no other singer (alive or dead) has sold more albums than Elvis! The catalyst that personifies the Elvis phenomenon has to be, his music. From his first recording session (July 1954) that produced That’s Alright Mama & Blue Moon Of Kentucky Elvis helped Sam Phillips to fulfil his lifelong dream of marrying a white voice to black music – and the combination was lethal! Back in the 50’s, Blacks were always singing about rockin’ and demanding their partners, roll. So there was no doubt what Rock n Roll meant – it was a synonym for sex!

While Black music lamented about sex, white music had lukewarm lyrics about unrequited love, like Frank Sinatra’s Young At Heart. Only Elvis’ unique melodic voice, moaning about a girl he was fooling’ with, defined those risky lyrics – always with a groan thrown in for good measure. It was as if Rock n Roll had been custom-built for Elvis’ persona. His voice, with its Southern cadence invited the listener to partake in an alternative to mechanical sex. But it was his transition from the recording studio to the stage that made Elvis Presley the consummate Rock and Roller Before an audience, Elvis entered nonchalantly, but then exploded – swinging his hips and shaking his left leg while making love to the up-right microphone. That incredible sight drove the audience crazy their bodies writhing to the beat of the music. Because, whenever Elvis strutted the stage he immediately created and emotional relationship with his audience. Suddenly, Rock n Roll transformed every moral fashioned teenager into acting like an animal.

In the 1950’s adults and parents feared that a sexual epidemic had broken out – and it had! During his lifetime and generations to follow, Elvis’ music has influenced countless of musicians – the list too long. The 1956-58 years were arguably the most creative time in Elvis’ musical career. These recording sessions were the most spontaneous and full of experimentation, but, more so, Elvis produced an unprecedented 11 Rock n Roll classics such as: Heartbreak Hotel, Blue Suede Shoes, I Want You, I Need You, I Love You, Hound Dog, Don’t Be Cruel, Love Me Tender, Too Much, All Shook Up, Teddy Bear, Jailhouse Rock, Don’t and Hard Headed Woman – all number one hits. 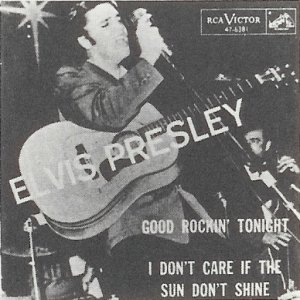 Heartbreak Hotel The biggest hit of all was the haunting 1956 release Heartbreak Hotel . Tommy Durden, a retired dishwasher repairman teamed up with Nashville songwriter Mae Axton the mother of country singer Hoyt Axton to compose the mega hit in only 22 minutes. Durden was playing guitar with Smiling Jack Jerring and His Swing Billies in Gainsville, Florida when he got the idea from a newspaper story about a man who committed suicide. The victim was found clutching a note that read, “I walk a lonely street.” Curiously, the word “blue” figured in several Elvis hits and other popular songs he recorded. Blue Moon, Blue Moon of Kentucky, Blue Christmas, Moody Blues, Blueberry Hill & When My Blue Moon Turns Gold are a few.

Blue Suede Shoes penned by Carl Perkins in 1955 as the result of an experience while playing at a high school dance, was one of Elvis’ favorites. Perkins related that he was watching a boy dancing with a beautiful girl, when the teenager warned his partner, “uh-uh! Don’t step on my blue suede shoes!” Perkins said that he couldn’t get the incident out of his mind and awakened at three the nest morning and wrote the lyrics on a brown paper bag. He released his recording on January 1, 1956 and it became a million seller. Elvis recorded the song on RCA and it was released later the same year, climbing to 24 on Billboard’s Top 100 chart as part of the EP Elvis Presley. The color was even featured in the title of two Elvis’ movies.

One was GI Blues and his fifth film, a 1960 Hal B Wallis production, in which he co-stared with Juliet Prowse. The other was his eighth feature film, Blue Hawaii which he filmed in 1961 opposite, Joan Blackman Joan also worked with Elvis in Kid Galahad . Of all the actors Elvis co-starred with he said he liked working with her the least. But, gentleman as always, He didn’t say why.

Top Single Elvis’ longest running single on the Top 100 was the still popular All Shook Up . It spent a total of 30 weeks on the charts, including eight straight weeks as number-one. Only Elvis most devoted fans know that Otis Blackwell was inspired to compose the lyrics in 1956 when was sitting in the offices of Shalimar Music and on of the owners came by, shaking up a bottle of Pepsi. The music executive challenged Blackwell, who could write a song about anything to write a hit song about that bottle of Pepsi. Blackwell was back with the lyrics the next day and Elvis recorded it 12 Jan 1957.

Although Elvis could sing almost anything he depended on professional writers to come up with his songs. Just occasionally he teamed up with his buddies to compose songs. He once worked with Charlie Hodges and Red West to create You’ll Be Gone, which he recorded in 1962. Red wrote or co-wrote several other songs both for Elvis and other recording star, including Ricky Nelson, Pat Boone and Johnny Rivers. Some of Red’s tunes included Separate Ways, with Richard Mainegra, which Elvis recorded in 1972. If you think I don’t need you written with Joe Cooper and sung by Elvis in Viva Las Vegas and If You Talk In Your Sleep with John Christopher and recorded by Elvis in 1973. Elvis still remains a powerful force today. Radio still includes him in their repertoire. When an Australian radio station conducted a survey of the 500 most favorite songs – Elvis had 3 songs in the top ten – Love Me Tender (10) Wooden Heart (7) Are You Lonesome Tonight? (3). Recently, BMG took control of the hopeless situation. The demand by Elvis fans for something special was heard loud-n-clear, and BMG Records answered with a worldwide Elvis campaign. 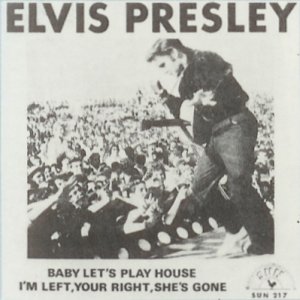 From the classic hits, to the best of Elvis of the 60’s with, In The Ghetto and Crying In The Chapel. The final tracks, recorded live from his 70’s concert performances range from the low-down, Burning Love to a delicate version of Softly As I Leave You that’ll leave you breathless. ELVIS IS BACK, the album Elvis recorded in 1960 at Nashville Studios, was his first and best recording effort after his army stint. The unusual array of songs includes the ballad, Blue Moon, the bluesy, Reconsider Baby , the no-holds-bar, Dirty Dirty Feeling and gospel-style, The Thrill Of Your Love. With ever song you get the feeling that Elvis is hitting back as if making up for long time!

In 1973 the first live telecast via satellite beamed across the globe. As 90 million people stopped to watch, Elvis rose to the challenge. The ALOHA FROM HAWAII album is packed with 23 songs from his wild heydays to Beatles cover-versions. So much has been re-package by BMG it is difficult to keep up with the new releases. In 1969 Elvis decided to skip recording in Nashville and return to recording in his hometown, at the American Recording Studio in Memphis. This session under record producer Chips Moman proved to revive Elvis’ recording career and produced several number one hits: In the Ghetto and Suspicious Minds. Suffice to say, Elvis CD’s still sells & keep selling. To this day no other recording artist has come close to becoming another Elvis Presley. As John Lennon so aptly said, “Before Elvis there was nothing.”