Elvis White Christmas Song by Irving Berlin There are many articles about the Elvis’s White Christmas recording of the Irving Berlin song controversy in the media  since 1957. However, at the time nowhere is there any  mention of Irving Berlin trying to get Elvis’ version of White Christmas banned? The fact is that the story doesn’t seem to appear at all anywhere until 1990 when Laurence Bergreen included the anecdote in his acclaimed biography of Irving Berlin, “As Thousands Cheer”. There, we are told that, on hearing the recording for the first time, “he immediately ordered his staff to telephone radio stations across the country to ask them not to play this barbaric rock-n-roll version.” In the notes for the book, Bergreen lists an interview with Walter Wager as the source of the information. Wager was a novelist and an executive of ASCAP. The question raised here as to how Wager knew this information if he wasn’t with Berlin at the time. In fact, this could easily have been a story that Berlin told to him at a later date, and that Wager  repeated in 1980s to Bergreen.

Some have suggested that the above “Elvis Autographed Picture Sent to Irving Berlin” this could have been an apology of some sort due to the possible idea that Irving Berlin had complained to radio stations disliking Elvis’ version and asking for it to be banned. However suggestion that it actually seems to support many fans viewpoint – as why would Elvis write a nice signed autograph to Berlin if he was trying to get his record stopped from being played on the radio? At the time of the recording in 1958 Elvis Presley was the world’s famous entertainer, therefore, had no reason to apologise for his reinterpretation of any song to the songwriter. As the royalies composers/songwriters earned due to Elvis’ recording of any song would have been to their benefit as Neil Diamond stated. Elvis recorded two Neil Diamond songs, ‘Sweet Caroline’ live in concert  1970 ‘On Stage’ album .  ‘And The Grass Won’t Pay No Mind’ at American Sound Studios in 1969, the song was included on ‘Back In Memphis’. Diamond says, “I was too pleased to have Elvis record his version of my song, and the royalities are still coming in” 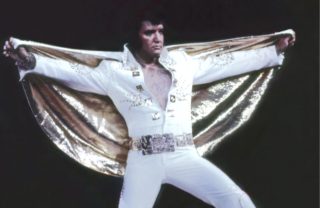