Jewelry worn by celebrities is now becoming the most sought after fashion statement. Audrey Hepburn made Tiffany jewelry famous  Copies of Bad Pitt’s wedding ring and Jennifer Lopez’s engagement ring with pink diamonds sold out. Elvis diamond ring sold for 50K on eBay.  Elvis  10k gold ring, size 10 3/4, contains 56 diamonds. The diamonds are set within a tiered octagonal design. The ring was given to Sam Thompson. Thompson was Elvis’ bodyguard and the brother of Elvis’ girlfriend Linda Thompson.  Sold for $13,750

Elvis Presley 14k gold ring has an open front, squared-back band that creates the number “10”. The “1” is a rectangular design containing 3 diamonds. The “0” is a large black cabochon star sapphire weighing approximately 2.5 carats, surrounded by 13 diamonds. Ring, size 9  Sold for $15,000

Elvis gave TCB necklaces to those close friends. This one is gifted to Sam Thompson brother of Elvis’ girlfriend Linda.  The TCB pendant was made by Elvis’ jeweler Lowell Hays.  TCB is an acronym for “Taking Care of Business.” Sold for $11,750 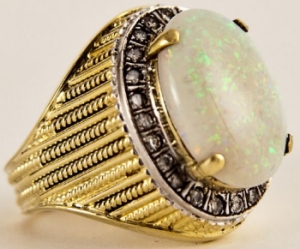 A massive 14KT gold vintage ring featuring a beautiful huge crystal opal surrounded by approximately 1.25ct of VS diamonds. Purchased by Elvis at Thunderbird Jewelers in  Vegas early 1970’s and worn both on and off stage.  Sold for US$9,000

Elvis wore one of the original TCB necklaces personally. He gave one to his Aunt Delta. The original TCB’s were expensive and first class, explains Red West. “Elvis gave them to those of us who were around him, like myself, Joe Esposito.

“When I walked in their was Elvis, Linda, Billy and Jo Smith and Elvis broke into a smile. He took the TCB gold necklace/pendant out of a box and put it around my neck and then he read the TCB Oath and put his arms around me and hugged me.” In March 1977, Sam’s wife Louise was presented her TLC pendant. The Thompsons are among the few husband and wife teams who have both the TCB and TLC necklaces. 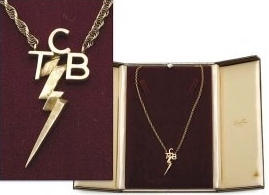 Elvis’ platinum wedding ring decorated by eight baguette diamonds set within a border of sixteen full-cut diamonds, for a total weight of  1.65 carats.  Ring size is 8.  Elvis, wanted the ring made with a row of eight baguette down & eight round diamonds because  number 8 was Elvis’ lucky number.