The question has to be asked why Graceland has erased all signs of Elvis Presley Jewish Heritage? When Elvis Presley’s mother Gladys Love Presley died on 14 August 1958 Elvis and his father Vernon included a Star of David on her headstone in honor of his Jewish heritage. Gladys Love  Presley was originally interred at the Memphis Forest Hill Cemetery. After Elvis died in 1977, Vernon had both Elvis and  Gladys was reinterred at Graceland. Now known as the Meditation Garden.  After Vernon’s death Gladys’ new headstone, lacking both Elvis or Vernon Presley’s personal attention Gladys Love headstone (seen above & below) is no longer located in the Meditation Garden area at Graceland.Which begs the question where is Gladys Love Presley original head stone with the “Star of David” today? 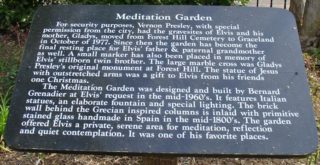 As the Graceland Meditation Garden Notice states that “for security purposes October 1977  Vernon Presley had Elvis and his mother moved to Graceland from Forest Hill Cemetery “. So where is  Gladys Love Presley’s original headstone resting today?  There is no sign of it anywhere. The lack of respect for Elvis and Vernon’s own wishes have been ignored which begs the question why? 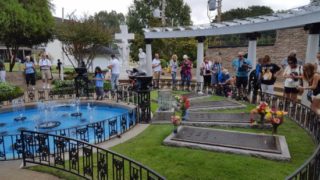 The cross with Jesus with angels statue had been relocated as a  mere back drop within the Graceland Meditation Garden area. And Gladys Love Presley original head stone has been replaced with a larger head stone next to her has Vernon with a new inscription written by her husband… “She was a great person. A great wife and mother. She was also loved by many. We loved her dearly and she is sadly missed” 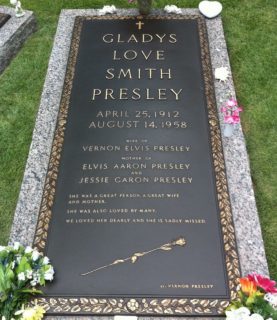 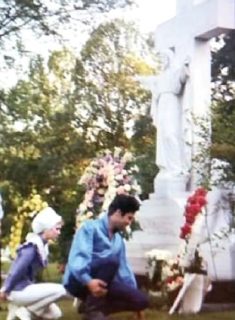 Gladys Presley Funeral   Jewish Elvis   Who is Buried at Graceland?