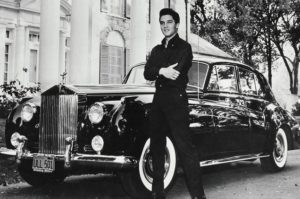 Elvis bought a 1954 Fleetwood Limousine just before going on a tour in it in March 1956. Originally blue, he had it painted yellow. In the spring of 1957, Elvis moved to Graceland, and this vehicle was used to stock the grounds. One time it was used to haul fowl – chickens, ducks, guineas, peacocks and a turkey back to Graceland. The car was so  defiled that even after he sent it to the Cadillac dealer to be cleaned and fumigated, it was never the same. Elvis told his Daddy it was time to buy a new car. That’s when he bought a 1958 black Cadillac Limousine.

The car was displayed at the 1977 Tri-State Auto Exhibition in Denver, and was last driven in April 1981 when it took part in the premiere of “This is Elvis” at the Memphian Theatre. Since June 1982 the car has been on display at the Elvis Presley Automobile Museum at Graceland. It also appeared on stage at the “Elvis Aaron Presley: A Tribute” show in Memphis, 1994.

January 1961 Elvis signed a 5 year contract with Hal Wallis. To celebrate he went out and bought a Rolls Royce Phantom V from a Beverly Hills dealer only to bring it home and have his mothers’ chickens peck away at their reflections in the elegant finish. Most people would have just shot the birds but Elvis just chose to have the car repainted four or five times.

I (Alan Fortas) ended up driving the Rolls and while it wasn’t the most dependable car we had a lot of fun with it. I remember driving it home from California one time & stopping to buy gas in Forrest City Arkansas about sixty mile outside Memphis. Elvis always like to have the Rolls gassed up and washed in he wanted to short it off or take somebody for a ride.

The gauge said the car was almost empty when I pulled into the station. It has a big tank for its time held about 25 gallons 0 and took a while fill it up. Apparently Forrest City had never has a Rolls grace it little streets and word traveled like wildfire. The attendant was still pumping away when I look around to discovered that the whole town stand there gawking. There were lots of oohs and aahs and talk about the car maybe belonging to some celebrity. 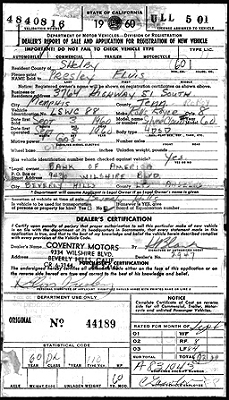 Elvis never wanted the general public to know whose can it was, so he always told me to say that I was just delivering it for a car service. I was ready when the question rang out from the crowd.

“Who’s car is that, mister?” “I don’t know, I replied. “I work for a service in California I was just paid a hundred dollars to deliver it to Memphis.” A hush fell over the crowd people reached out a tentative finger to touch it and like Gladys’ chickens to see their reflections in the paint. Finally a guy elbowed his way to the front. “I know whose car it is” he said.

“Tell me,” I said “I wish I knew” He pointed to the RR on the grill “Roy Rogers,” he announced “That’s whose car it is!”  The crowd agreed…. “You’re probably right, ” I answered “I never thought of that. Yeah, it must be Roy Rogers car” 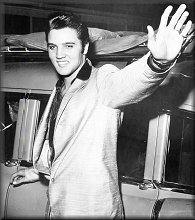 Then I handed the attendant Elvis’ credit card which read E.A. Presley. The gas jockey either never stopped to look at it or he was too stupid to figure out that EA was Elvis. I drove off laughing so hard I wondered how they kept from hearing me all over Forrest City. When I finally got to Graceland, Elvis made me relate that story to everyone that would care listen for the next week… and every time Elvis smile proudly. Elvis Car Collection                   Elvis Cadillacs