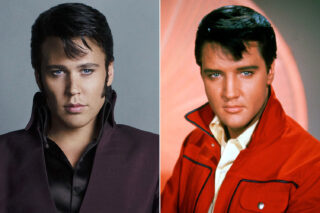 Separating fact from fiction. Setting out to make an Elvis movie is a mine field. The name Elvis is instantly recognised in every country of the world. Most fans have a personal view of his life and legacy. The King of Rock and Roll is regarded as one of the most significant cultural figures of the 20th century. To his followers Elvis was the second coming, there is only one person more celebrated and he turned the loaves into fishes. So pity the film maker who ventures into this sacred territory. 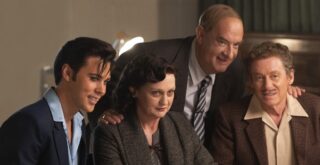 Baz Luhrmann’s ELVIS movie is a time-line disaster that runs nearly 3 hours with little to no plot line. To this writer’s eye it’s cut in the rapid style of a music video, blink and it’s gone, or worse it was never there. I can’t condone messing with the Elvis time-line.  Elvis was never handcuffed for gyrating his hips, or for anything he did on stage. The movie would have you believe that when Elvis performed at Russwood Park, Memphis, Tennessee on July 4, 1956, he sang Trouble to a frenzied crowd and was taken away in handcuff’s because of his obscene behaviour. Trouble is a blues song written by Jerry Leiber and Mike Stoller for the 1958 movie King Creole, and then released on a sound-track EP, that’s 2 years after the Russwood Park Memphis concert in 1956.

In the Elvis movie Priscilla meets Elvis in Germany and they listen  to the song  Can’t Help Falling In Love . How can that be ? when the song was written for the movie Blue Hawaii which came out two years after that scene takes place. Alternatively credible evidence indicates that they had a mutual interest in Mario Lanza, and were more likely to have spent  time listening to his records.  There are many instances in this film where fiction heavily out weighs fact.

The casting of Colonel Tom Parker as Tom Hanks is a marquee decision that doesn’t translate to the screen. There is no doubt his appearance adds credibility to the movie, however his accent slips backwards and forward in an uneven performance. I also have a problem in the way he discovered Elvis – Casting an unknown would have made more sense. One is always conscious that you are looking at Tom Hanks in a fat suit.

Does Baz Luhrmann’s ELVIS movie work at any level ?  Yes the ELVIS movie is a Hollywood style romantic fantasy loosely based on fact, similar to the 20th Century Fox fictionalized movie The Greatest Showman, with Hugh Jackman playing the role of Phineas Taylor Barnum.  Jackman was brilliant in the lead role, as is Austin Butler who creates a very credible  Elvis. One of the reasons for the films success is the repeat business. Woman are leaving the cinema with tears in their eyes and then are going back, to revisit the experience.

The most asked question about the Elvis movie. Who is singing? Yes that is Austin Butler singing in the first performances in the movie. As Elvis becomes more famous and develops, Butler’s voice is “blended” with that of Elvis Presley.