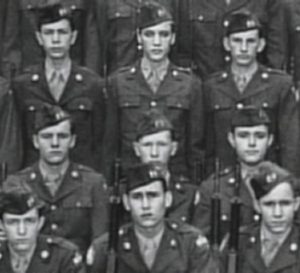 The boy, who had sung out happily whenever someone would listen, became reluctant to raise his voice. A classmate, Mona Raburn Finley says, “I felt sorry for Elvis. He was a likeable boy, but he was sort of different. He started wearing black as lot – black shirts, black trousers. Then he grew those sideburns – he wanted to look grown up, I suppose.

He had that long hair when the other kids wore GI haircuts. And when he brought his guitar to school and we were all down in the music room, we’d have to beg him for the whole hour to sing. Then just when he started, the bell would ring and we’d have to go.” 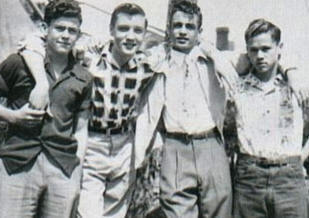 Miss Eleanor Richmond, assistant principal, says, “He was a gracious, quiet boy, and we were all aware of his deep religious convictions.” Principal Tom Brindley remembered, “Elvis never had to come to the office for discipline. He did his best work in the shop classes – electric shop, particularly.”

George Klein, who edited the school’s newspaper and yearbook, comments, “I scarcely go to know him until tenth or eleventh grade. I think he felt more at ease with the teachers then with the kids. The class prophecy read: Donald Williams, Raymond McCraig and Elvis Presley leave hoping there will be some one to take their places as teachers pets. But whenever he sang  it really hit me. I can’t remember another thing from those programs just Elvis.” 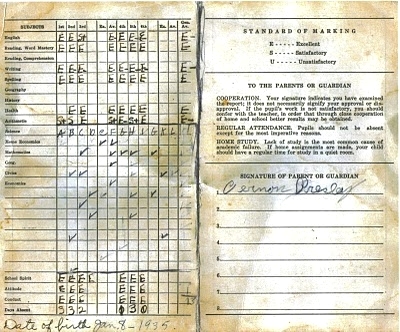 “For our Variety Show, his senior year, we had thirty numbers and no time for individual encores, so I said that the one who got the most applause could take the encore. I’ll never forget Elvis’ look when he got it. His face lit up and he said, “Oh Miss Scrivener, do they really like me that much?”

Elvis continued to feel a great affection for his teachers and a loyalty to his school. In 1955, he stopped in the day before Christmas vacation started to bring a present to Miss Scrivener and to have a talk. He also attended graduation exercises that year.

Miss Scrivener chucked at the recollection. “Kids were clustered around him, asking for autographs, and I was ready to stand right in line with them. My little niece who lives in Oshkosh had made me promise I would.

Elvis, when he saw me, shouted, Here’s Miss Scrivener! and broke out of the crowd to talk. We think a lot of him, and we’re happy that he, too, has so much affection for us.”