Gold Rolex Watch Part of Elvis Presley’s  jewelry collection included many watches from the novelty handmade guitar watch to luxury watches such as, Omega, Longines, Ventura Hamilton to gold/diamond Rolex . Omega Black Dial Constellation Calendar watch is up for auction at Antiquorum Auctioneers June 12  New York was gifted to Elvis’ friend and musician Charlie Hodge  who handed Elvis scarves on stage  Hodge recalls “ several times I told Elvis how beautiful his watch was and he took it off his wrist and gave it to me.”

Lord Elgin Retro 1957 14K gold watch. Know to most collectors as  “Elvis” watch because it was his favorite watch. There are many photos from the 1950s showing the King wearing his Lord Elgin. It features an early use of the digital concept, with two rotating disks displaying the time through a window in the case, with the hour disk jumping at the top of each hour. The case measures 36mm long and 26mm wide. Original rotating dial disks were easy to read with a glass crystal. This watch powered by a 21-jewel Elgin grade 721 adjusted movement.

Elvis Guitar Watch In 1960 he took towearing the distinctive style, Hamilton Ventura. While the offbeat arrowhead-shaped dial sat comfortably within the design aesthetic of the time in 1957 as the world’s first electrical, battery-powered watch, the Ventura was by then the coolest timepiece in America. It had been presented to Presley to wear in the film Blue Hawaii 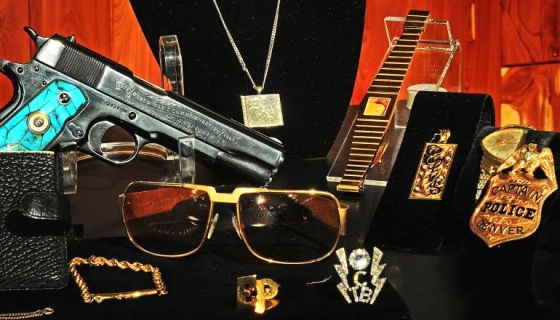