THE MEMPHIS MAFIA Throughout the early 1960’s, Elvis spent a lot of time with his fans at the gates of Graceland. He gave out autographs, posed for pictures, and kissed every girl. Once a man came up to Elvis and said “Elvis I don’t want a kiss from you, but would like an autograph!” Elvis looked up at the wisecracker and winked at the girls and before saying “Ladies this guy doesn’t know what he’s missing. Tell him!” The girls went wild in response. Before the man left. Elvis yelled “Hey you sure you don’t want a kiss? I have plenty more available!” 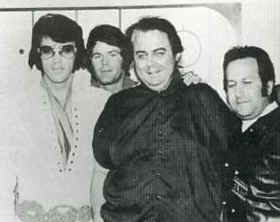 When Elvis was three years old, his hair had grown past his shoulders, Gladys sat him down wrapped a towel around his shoulders and cut his hair. Elvis cried when his mother cut the first lock of his hair. When she was finished, Gladys put her sons precious curls into a box and hid them for safe keeping. Twenty years later Elvis received another memorable haircut courtesy of the United States Army. The regulation crew cut displeased Elvis a great deal; long hair was a big part of his identity.  Gladys worried about her sons reaction to such major changes in his lifestyle. She knew that he missed his hair, so she sent him the old box containing the little blond curls. Elvis did not understand the meaning of the gift until he read the note which accompanied it. Elvis laughed and cried as he read the touching letter which explained the significance of the hair. The following morning, Elvis called Gladys at Graceland and thanked her for the package. He told her that he loved her more than she could ever know, and that he missed her terribly.

In early 1956 Elvis was driving a new Cadillac down a Memphis street when a teenage boy ran after him on foot. The boy ran behind the car for several blocks. A policeman noticed the boy chasing the car, thinking the vehicle was stolen and the boy was chasing the thief. He turned on his siren and drove after them. 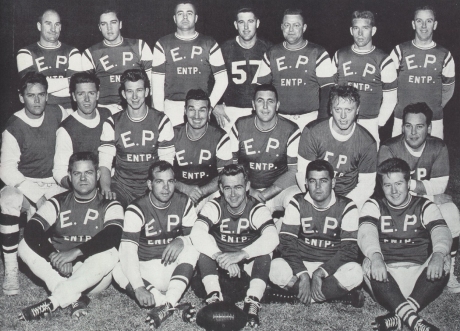 Several yards later both car and runner came to a halt. The policeman fined them both $25. Neither Elvis nor his pursuer knew what the tickets were for, but the boy insisted on paying. He said it was his fault they were fined and that it was worth paying $ 50 for the opportunity to meet his idol. When Elvis heard the boys reason for chasing him, he took the two tickets and said he would pay for them. The boy ran the two miles back home, triumphant at meeting having met Elvis Presley.

Elvis found interviewers fascinating He liked their questions but could not understand where they came up with them. One interviewer Elvis recalled in later years took place on August 5th 1956, with Luther Voltz Jr. serving as reporter. Voltz worked for the Miami Herald.

Voltz asked Elvis how he felt about Estes Kefauver and Adiai Stevenson from the Democratic National convention, the Andrea Doria disaster, the Empire waistline in the world of fashion, and Pablo Casals, the world’s greatest cellist. Elvis told his friends he had never heard of any of those things or people; he knew very little about politics and current events. He told the reporter that he would rather keep his views to himself because he did not want to be labeled. The answer was brilliant, and Voltz left him alone. Elvis always enjoyed telling the story of how he managed to outsmart the reporter and answer his questions without really answering.

In early 1956 a young heavy-set teenager jumped the Graceland wall with a complete Elvis Presley record collection under his arm. He wanted Elvis to sign all of the albums and was determined to pass the guards and get to the door of the mansion. Once he made it to the door, he spoke with one of the bodyguards and Elvis was called. When he saw the heavy teen and heard that the boy had jumped the five foot wall Elvis burst out laughing.

He could not understand how this fat boy had managed to jump the wall when no one else could. Elvis loved the teens perseverance and told him so. Elvis signed the whole record collection and asked him to hang around. The teen was Lamar Fike, who became both a member of Elvis’s entourage and his good friend.

In one scene in “Jailhouse Rock” Elvis’s character is on stage singing “Young and beautiful” at the club La Florit when a drunk, played by Frank Kreig starts to heckle him. Elvis gets mad, jumps from the stage, and breaks the guitar across the heckler’s table. He runs out of the club and actress Judy Tyler runs after him. As she ran. Tyler put her hand through a swinging plate-glass door. Most of the glass shattered into tiny pieces, although several sword like pieces still clung to the door frame. Elvis noticed that the door was about to swing back again, and he grabbed Tyler and pulled her out-of-the-way. The accident happened so fast that the actress was dazed and confused. First aid was administered on her bleeding arm and then she was back in action. She thanked Elvis for saving her life.

In the mid 1970’s a couple whose wedding was coming up in a few weeks’ time found out that Elvis was scheduled to appear in their town. They were both avid Elvis fans and had sworn that the next time Elvis was close, they would go see him. They bought tickets and resumed finalizing their wedding plans. The day of their wedding the couple exchanged vows in a beautiful ceremony. The reception was held directly afterward. Halfway through the evening one of their relatives asked how the Elvis show was. The new bride dropped her champagne glass when she remembered that Elvis’s show was that very night. They had missed Elvis! The bride started to cry and her new husband tried to console her. If she had looked at her tickets and seen the date she would have postponed their wedding!

Her husband promised to take her to Elvis’s show the following night. The next evening they put on their wedding attire and went to the show. Charlie Hodge, one of Elvis’s dearest and oldest friends, saw the couple and approached them. They told Hodge their story, and he went backstage and relayed it to Elvis. The couple took their seats and eagerly awaited Elvis’s appearance. When the “2001: A Space Odyssey” theme began, the bride nearly fainted. During the show, Elvis stopped singing, looked into the audience and asked where the newlyweds were. Shocked, the couple jumped up. Elvis looked at the groom and joked, “Don’t you have anything else to do tonight?” The bride answered, “No way!”

Elvis sent word to have the couple meet him backstage. When the show ended, they were escorted to his private dressing room where they were introduced to Elvis by Charlie Hodge. Elvis presented the newly weds with his version of a wedding gift, a Cadillac & a check for $10,000 Elvis told them that he was flattered that they wanted to postpone their wedding just to see him.

One day in the 1970’s, Linda Thompson talked Elvis into going with her to the local McDonalds located at 4237 Elvis Presley Blvd. in Memphis. She said she was sick and tired of them never going out together. Thompson made a bet with Elvis that no one would recognize him and he could relax. Elvis believed he would not only be recognized but mobbed as well. So with the bet was set. Elvis drove and parked in the regular parking lot. Linda walked into the restaurant with Elvis at her side. They approached the counter and put in their orders. So far so good, Elvis found himself enjoying the night out and commented to Linda that she had been right.

Several minutes later a man walked up to their table, looked at Elvis, and said that he was sick and tired of men trying to look like Elvis Presley. He said that there was only one king. Shocked at the man’s assumption that he was an impersonator, Elvis informed the stranger that he was indeed Elvis. The man would not believe him and said that he pitied him for thinking that he was Elvis. Not knowing how to convince the man, Elvis turned to Linda who was thoroughly enjoying the scene and said, “Okay Bob, enough is enough. Stop playing!” When Elvis told her to stop joking and admit who he was, she said, “Will you cut the crap, Bob!” satisfied the stranger left. Elvis was totally dumbfounded at what had happened, but Linda started to laugh.  “See I told you, said Linda “You wouldn’t have any problems if you went out on your own. You’re your own prison.”  After the evenings events Elvis and Linda went out alone several times.

Tommy Milham from Mobile Alabama, was an avid Elvis fan. When he learnt that Elvis was to perform in his hometown on April 29 1976 at the Municipal Auditorium, he went directly to the ticket office and stood in line to get front row seats. As he stood patiently waiting, he spotted Elvis standing off at a distance near his limousine. He was ecstatic at seeing his idol and yelled out. Elvis, who got a kick out of watching his fans stand in line to tickets to his shows, walked slowly over to Milham. Because the man was last in line, Elvis was able to walk over to him without causing too much of a commotion. Milham asked for an autograph. Neither had a pen handy, so Elvis offered him his scarf

Milham boldly asked Elvis for his diamond ring instead. Shrugging his shoulders, Elvis took the ring off and gave it to Milham in a discreet handshake. Elvis said he had to go and walked back to his limo. Milham did not get front row seats – however, fifth row was good enough. On the way home, he stopped at a jewelry store and had the ring appraised it was worth $ 2,000