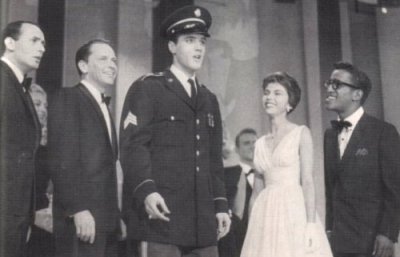 FRANK SINATRA  WELCOME HOME ELVIS Show Broadcast March 12th, 1960.  Frank Sinatra scored a major coup  having Elvis Presley in his first TV appearance since his army stint. It monopolized the home viewing public since the King of Rock was now a crossover phenomenon, loved by audiences of both the crooner and rock n roll generations

Elvis Presley’s appearance on the Frank Sinatra “Welcome Back” Show is saved for the third act. Padding out the moments till his appearance are several shudder-inducing Dancing For Dummies numbers performed by the Tommy Hansen Dancers, appearances by Sammy Davis Jnr & Peter Lawford (do a little hoofing) Joey Bishop (who did most of the writing for the Rat Pack) and Nancy. Its shocking to think that they are all gone but Nancy and Joey. Bishop, with his Tony Curtis voice, the last of the Rat Pack, is now 86.

And of course theres Sinatra himself, singing a few standards using a time machine through-line to illustrate the period of time Elvis was gone. His numbers, backed by the Nelson Riddle Orchestra and his patter with his buddies, have an improvisatory feel (barely rehearsed) To some extent this is the kind of casual mood the Rat Pack always tried for. Frank Sinatra seems pretty warm towards his daughter, Nancy, in this, his first TV appearance with her, and he reflects on her engagement to Tommy Sands. The subsequent marriage lasted five years (60-65).

Then came Elvis. Presley, as always on pre-“68 Comeback Special” TV, looks both uncomfortable and great. His sideburns may not have grown back, but his pompadour certainly had. And he practically towers over his host. Whats more, hes in better voice than either Sinatra or Sammy Davis Jr. This disc belongs in the Elvis collection rather than the Sinatra collection: Elvis sings “Fame and Fortune” and “Stuck on You” and the “Witchcraft” duet with Frank Sinatra ends the show.