George Klein (October 8, 1935  February 5, 2019) born in Memphis, Tennessee was a radio personality who became friends with Elvis Presley while they attended Humes High School and stayed close to Elvis throughout his career. Klein died aged 83.

Graceland posted: ‘Priscilla, Lisa and all of us with Elvis Presley Enterprises are deeply saddened that we have lost our dear friend George Klein. Elvis and George met at Humes High School in Memphis and formed a lifelong friendship. Elvis stood up as George’s best man at his wedding and George remained a close confidant throughout Elvis’ life. After Elvis’ passing, George continued as a great friend and supporter of Graceland, Lisa and Priscilla and continued to honor Elvis’ legacy through sharing stories and memories with fans around the world as a DJ on Elvis Radio at Graceland. Our hearts are with George’s family, friends and fans – as we celebrate his life and his important place in the history of Memphis music’. 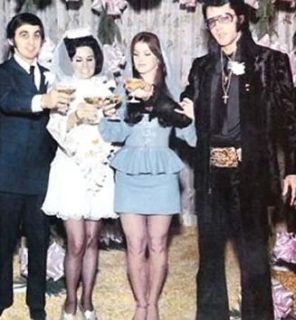 Klein hosted a radio show featuring Presley’s music on Sirius XM. He had also hosted radio and television shows in Memphis dating to the 1960s. Klein was known throughout the city, speaking at charity events for no pay, Priscilla Presley said… “He has been an unbelievable ambassador for the city, for Graceland, for Elvis Presley…”

Elvis served as Klein’s best man, and Klein was a pallbearer at Presley’s funeral. Klein appeared in his friend’s film, ‘Jailhouse Rock’. When Presley was posthumously inducted into the Rock & Roll Hall of Fame in 1986, Klein made the acceptance speech.