12 March 1957 Elvis Presley bought Graceland. The contract of Sale was finalised 26 March 1957 The interior of the Graceland Mansion was changed before it was open to the public. However, Priscilla Presley changed it back to what it looked like when she lived there? It seems Ms Presley did not like Linda Thompson’s “red theme” interior which was re-modeled 2 years before Elvis died.  To give Linda Thompson her designer dues, Priscilla Presley did keep the jungle-room  and pool-room the same 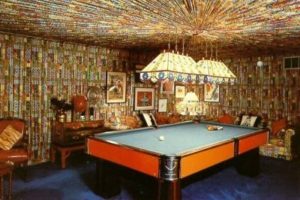 Linda Thompson, fell for Elvis in 1972 when he and Priscilla were separated and she attended a private movie screening he was hosting at a cinema in Memphis.

She ended up moving into Graceland in a relationship that lasted four-and-a-half years until she walked out on him just before Christmas 1976 for the same reason Priscilla had ended their marriage; his endless infidelities.

During her time with Elvis Linda Thompson went on a spending spree and pimped-up Graceland decore in bordello red and animal skins and fluffy cushions. Graceland’s decore stayed like that until the mid 1980s when Priscilla Presley changed it back to the soft pastel blue colors you see today… However, Elvis’ bedroom has not be changed since his death in 1977 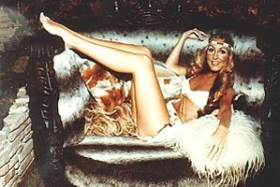 Linda Thompson and Elvis Presley met in Memphis, Tennessee on July 6, 1972 and quickly became inseparable. She wrote about losing her virginity in early September after they were living together in Las Vegas….  “Let’s just say if you’re not ready then, you’re never going to be ready in your whole entire lifetime. … I knew I was ready to make love with this man I absolutely adored with all of my heart and soul…” recalls Linda Thompson