James Burton was Elvis Presley’s Guitarist 1969 -1977 James Burton  was Inducted into the Rock n Roll Hall of Fame James Burton performed with Elvis Presley. Now, a statue of him as a thirty-something stands next to the King outside his hometown’s Municipal Memorial Auditorium, where both performed 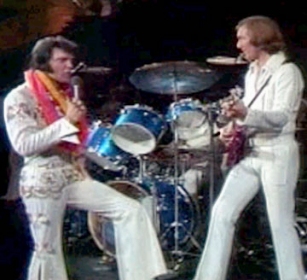 SHREVEPORT, La. – James Burton played with Elvis Presley. Now, a statue of him as a thirtysomething stands next to the King outside his hometown’s Municipal Memorial Auditorium, where both performed. “Yeah, it looks like me,” the guitar sideman said Sunday, his 66th birthday and the last day of his new James Burton International Guitar Festival. “The attitude. The smile. The clothes and the guitar.” 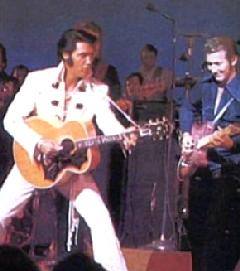 Sculptor Eric Kaposta, who also made the Elvis statue, said he used old photographs for the Burton likeness, which shows the Rock and Roll Hall of Fame member keeping time with the back of his left heel. 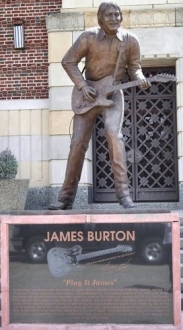 Burton remembered when he first played the Municipal Auditorium, in the mid-1950s. “I was 14 years old playing on that stage there,” he said, gesturing toward the auditorium. “I think of the friends I’ve known here and played with. It’s an honor.” Jeff Cook, lead guitarist for the band Alabama and now his own band, Jeff Cook & the Allstar Goodtime Band, said Burton helped influence his style. Cook was among performers at a sellout concert Saturday night in the Municipal Auditorium. Others included Brad Paisley, Steve Wariner, Dr. John, and Matthew and Gunnar Nelson, sons of the late Rick Nelson.

The three-day festival was created to raise money for the James Burton Foundation, dedicated to providing musical scholarships and instruments to children and young adults.” James has always been a guitar hero,” Cook said. “And I’ve always felt he was a little ahead of his time.”