“Elvis Presley and I should have been married,” says Joanna Lumley

Joanna Lumley felt a deep connection with Elvis Presley as a teenager  and says if she had met him, they would “obviously” have married. The actress went on a tour of Elvis’s homes and interviewed the Elvis’ former wife Priscilla. Joanna, 69, became a fan of Elvis, when she was a child. 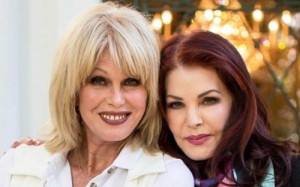 Joanna Lumley makes a trip to  Graceland and Tupelo,  Elvis’s home town where she visits the shack where he was born and the hardware shop where he bought his first guitar.

There, she talks to some of the people who knew him, including Sam Bell, who reveals what life was like for a young Elvis growing up in a time of segregation.

“I felt him in the cinema with Sam. Black friend Sam, in the cinema, from his childhood, when they would have to go through separate entrances to the cinema, and Elvis would duck under the rope and sit with them. And I loved him for that, because he was only a little boy, and he was colour blind. He didn’t get that, while the country got that, Elvis didn’t get that. And sitting in that little cinema, exactly where they sat – that was something.”