Before Elvis There was Nothing John Lennon

“Elvis was religion to me” John Lennon  This year marks the 38th anniversary of the death of the late, Beatles, John Lennon (1940 -1980). With the grim milestone coming up, his Beatles mate, Paul McCartney, 75, spoke about how he found out his close friend had died after he was shot to death at the age of 40 in New York by Mark David Chapman. “I was at home and I got a phone call… It was early in the morning. I was in the country and I just got a phone call. I think it was like that for everyone, just so horrific, you couldn’t take it in. And I couldn’t take it in….” “Before Elvis there was nothing” John Lennon

No one laughed more loudly than the King himself when the Beatles’ manager, Brian Epstein, boasted ‘My boys are going to be bigger than Elvis Presley’. It was the early sixties, and Presley, a living legend, appeared unassailable. Yet, in 1964, John Lennon, Paul, George and Ringo suddenly topped the American charts – and Beatlemania rolled the King in the greatest rock coup of all time. 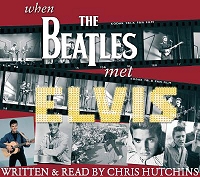 Chris Hutchins, a music journalist in his early twenties, was at the eye of the hurricane as the Beatles swept all before them. No other writer grew as close to the Fab Four from Liverpool as they conquered the world. As America turned to the Beatles in a big way during their 1965 tour, Chris Hutchins used his extensive network of connections to mastermind the greatest rock summit meeting ever! A rendezvous between the King and the pretenders who were seizing his throne. With co-author Peter Thompson, Hutchins draws on his own exclusive sources and unpublished personal archives, as well as FBI files and explosive dossiers from the District Attorney’s investigators in Memphis, to probe into the greatest rock story never told – one in which the lives of Elvis Presley and the Beatles became dramatically entwined. They reveal the passions and the power play, the corruption and the conspiracies, the vendettas and the vanity behind pop-culture’s greatest phenomena. Chris Hutchins book  “Elvis Met the Beatles” revised recollection of the Beatles, Elvis Presley, August 27, 1965 meeting is a 180-degree turnabout from any previously recorded data of this historical event. 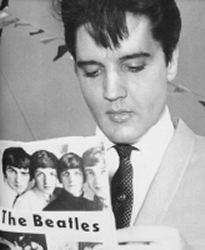 I hereby challenge Mr. H to prove his outlandish claims, as in-depth research reveals otherwise, giving Brian Epstein and John Lennon credit for arranging the royal 1965 rendezvous. It seems the passage of 30 years has somewhat distorted Mr. Hutchins memory (not to mention the facts) that had led to docking the truth with elaborate accusation in order to make a buck.

By wantonly dipping his pen into the endless inkwell of posthumous Elvis tabloid reporting Mr. Hutchins (like so many others) has sold-out for a handout. With neither, Elvis Presley nor John Lennon alive to dispute these latest allegations, Hutchins can safely pen his poison without fear of being sued; however, he cannot erase the truth.

From the beginning, throughout his lifetime and until the end, John Lennon frequently cited the King as his idol. Naming Elvis on countless occasions as his mentor, as far back as 1963 with statements such as, I always wanted to be this tough James Dean type, but Elvis was bigger than religion in my life. 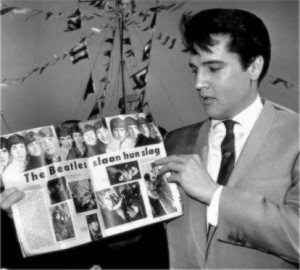 When I heard Heartbreak Hotel it was so great I couldn’t speak, I didn’t want to say anything against Elvis, not even in my mind.

Although by 1965 Elvis had lost his appeal with the 60’s hippie generation while resting on his laurels by starring in a series of asinine movies and his recorded output reduced to soundtrack albums when the Beatles arrived in the USA, without skipping a beat when asked what the Fab Four liked about America John Lennon retorted, “Elvis!”