John Wilkinson passed away January 11, Friday at his home in Springfield after a fight with cancer, according to a family spokesman. Priscilla and Lisa Marie Presley offered their “deepest sympathy” to his family, saying in a statement that “John and the beautiful music he made with Elvis will live forever in our hearts.” 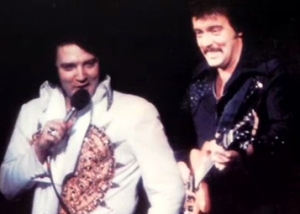 John Wilkinson was born in Washington DC in 1945. He was raised in Springfield Missouri. John’s father was a Professor of Psychology and his mother, a home maker. He had a good and happy childhood and wonderful parents. Music was the main focal point in the home and never a day would go by without it. When John first heard and watched Elvis as a young boy, it was at the time Elvis was in the Louisiana Hayride. He loved his music which was totally different to what they were used to in Springfield. John’s parents’ reaction to hearing Elvis was one thing, but seeing him was another. They were conservative people and not excited with the image of their son’s idol, however this did not deter him from buying Elvis’ records and eventually his parents accepted John’s new tastes.

When John first saw Elvis on TV, he did not like the way he played and treated his Martin D18 guitar and swore that one day he would tell him. John started playing the guitar himself at the age of five and by the age of six, he was also playing the banjo. Elvis came to John’s hometown and was second bill to Hank Snow. They were appearing at The Shrine Mosque, about the only place in Springfield to hold any shows. John found out when the sound checks were taking place and decided to make his way there to try and get to see and to speak to Elvis. He went in search of the dressing room and eventually found him. After knocking first before entering, he extended his hand to Elvis introducing himself. Elvis being the polite guy he was, invited him to sit down and asked him what he was doing there. John replied, ‘Elvis, you can’t play guitar worth a damn’. Elvis laughed and challenged John to play guitar for him. Against the wall was an old Gibson J45. He played and sang for Elvis and he was impressed with this kid. However, the conversation was soon interrupted when two burly guys entered the room and wanted to know what John was doing there. Elvis told them that John was his friend and he had just given him a guitar lesson. Before leaving Elvis told John that one day they would meet again. And the rest is history…