June Juanico from Biloxi was Elvis’ first sweetheart and the only girl his mother approved of. Today June Juanico, is a 65 year old grandmother, still lives in Biloxi, Mississippi where she fell in love with Elvis long before he was the King  and teen idol 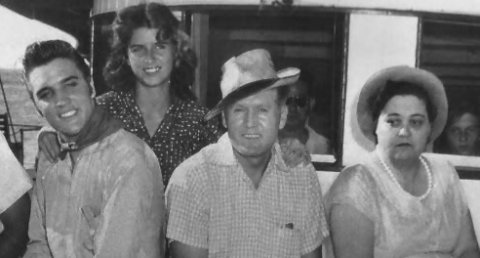 June shared a passionate, three-year relationship with Elvis at the start of his career, when was virtually unknown outside the southern United States. And June recalls a man far removed from the bloated, drug-addicted mega-star who died 16 years ago, on August 16, 1977. But it is another date that is forever etched into June’s memory – June 26, 1955. That was the she met Elvis and on that date 22 years later the King gave his last public performance. When Elvis spotted June coming out of the ladies’ room during intermission at one of his shows, she was a pretty, starry-eyed 17-year-old.

They struck up a conversation… “You’re not leaving are you?” Elvis inquired anxiously. “No, I’m just going to sit down.” “I’d like to see you after the show,” Elvis announced. “Why don’t you show me the town?”

“Well there isn’t much to see in Biloxi,” June countered. “I don’t care,” Elvis replied. “Just show me what there is.” Still dripping with perspiration after gyrating wildly on stage in what would become his trademark pelvis-thrusting style, Elvis picked June up in front of the theatre that night in his 1955 pink-and-white Ford Crown Victoria.

“He said he wanted to change, so we drove to his motel and I waited in the car,” says June. “We took in some floor shows and then talked until daylight. At dawn Elvis kissed me for the first time….
It was the most memorable date I had with Elvis.

We spent four-hour parked outside my house. He suggested we see the sun rise together, but I told him I’d have to go if my mother’s bedroom light came on.” “As dawn broke, Elvis kissed me, ever so gently. Then he poured out his heart to me and told me about his twin brother.” June says it was clear from that first date that Elvis had a deep love for his family. He told her how his mother had named his stillborn twin brother Jesse Garon because she didn’t want a grave that simply read Baby Boy Presley. But what struck June most about Elvis was how much he was amazed at his own success.

“I could tell immediately that he was going to be big. He had this magnetic appeal about him,” recalls June. After their first date Elvis and June kept in close contact by phone for 5 months while he toured. Never much of a letter writer, Elvis did communicate by telegram.

he couple dated throughout 1956. Elvis would serenade June with the soulful ballad, IS IT SO STRANGE. “I loved that song,” recalls June. “So I asked Elvis to record it. just for me. The verse, ‘Is it so strange, I have no eyes for any other girl.’ still has a special meaning for me till this very day.” When Elvis recorded that song, he called the album, JUST FOR YOU. While Elvis and his ‘devil music’ were becoming the center of controversy, Hollywood was clamoring to get a piece of the action. “Elvis always talked about wanting to be in the movies,” says June.

“He dreamed of becoming a serious actor like James Dean and Marlon Brando. He didn’t care to sing in the movies.” On April 1, 1956 Elvis did a screen test for Paramount Studios and was an instant star. He moved his family into a three-bedroom home he bought for $40,000 cash. Adding a swimming pool and bought his mother a pink Cadillac, Elvis called June from Hollywood. She could hear in his voice he wasn’t happy. “He just couldn’t be himself. He had to get up at 5 in the morning, and that was when he was used to going to bed,” says June. 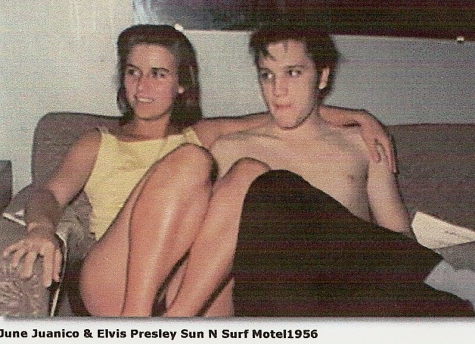 On one of his frequent returns to Memphis, Elvis invited June home to meet his parents. For two weeks she shared his life. Friends dropped by, and Gladys was always ready with a Southern-style meal. Elvis wanted to hire servants, but Gladys wouldn’t hear of it. “Gladys was happy as punch just to cook because Elvis had outfitted the kitchen with every conceivable appliance,” says June.

Vernon (Elvis’ father) just sat around reading the newspaper. “Vernon wasn’t a man of many words, but Gladys talked non-stop about Elvis and how shy he was as a child. “She worried about his future. She hoped she had brought his up right, so he could put a handle on his fame.” Gladys and June shared a mutual admiration which bonded into more than friendship. Gladys insisted that June use her first name – “Mrs Presley just don’t sound right, we being as close as family,” she would say. “So, I called her Lovey, a derivation of her middle name Love. She thought was special.” 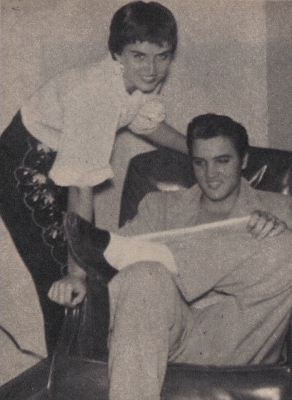 “Elvis and his mother named me, Little Satnin.” Satnin was Gladys’ pet name for Elvis because, she said, his skin was smooth as satin. By a sad coincidence, June’s son Tony was born the day Gladys died of a heart-attack – August 14, 1958. “I was giving birth when I heard about Lovey’s death.

Had Tony been a girl I would’ve named her Gladys Love in memory of Elvis’ mother,” says June. But it was more than a year earlier in March, 1957 that June made the most crucial decision of her life. “I couldn’t wait in the wings while Elvis got on with his career,” she says. “I said good-bye to Elvis because he broke his vow – he was supposed to be true to me. It just didn’t work out that way.” “There was no one in particular in his life then, but I knew Elvis was not being true to me. We parted friends,” says June. Elvis told June she would always be welcome in his home, but for the next six years she had no contact with him as she pieced her life back together. It was not until 1963 that June plucked up the courage to face Elvis again.

She drove to Memphis to catch Elvis at Graceland, but Elvis was not home. Elvis’ uncle, Vester Presley told her Elvis was at the local movie theatre. “The moment I entered the theatre I picked Elvis in the crowd. He was sitting up front. Priscilla was sitting next to him,” June recalls.  “Elvis was so surprised to see me, he jumped out of his seat and gave me a big bear-hug.” “Strange that Elvis introduced me to the rest of his entourage, but not to Priscilla.” “Priscilla didn’t even look my way. She kept her eyed focused on the screen the whole time. I guess, she was already used to girls falling about Elvis.”

The last time June saw Elvis, was August, 1969 in Las Vegas. No longer under contract to Hollywood, Elvis took on the new challenge performing live. He went on a diet. Reduced his drug intake. And walked to stage looking more handsome than ever. For the next seven years, the mature, Elvis poured out his heart and soul to the screaming fans – always to a packed house. “Elvis told me he was being true to himself by performing before a live audience again,” recalls June. “I was never much of a screaming fan, but that night brought back old memories, and I felt the need to scream…”

Seeing Elvis in 1969, June never dreamed that a mere 8 years later Elvis Presley would become caricature of his former self. Tears spring to her eyes and her voice drops to a whisper as she remembers the day, 16 years ago, that Elvis died. “For years I couldn’t talk about Elvis. But now with all that ugly stuff being written about Elvis, I have the need to set the record straight,” says June.

She is writing her story, IN THE TWILIGHT OF MEMORY. The title is from a line in THE PROPHET. “If in the twilight of memory we should meet once more. We shall speak again together and you shall sing to me a deeper song.” The book that June gave to Elvis in 1957 was found after his death, on his bedside table at Graceland. It is still there to this day.