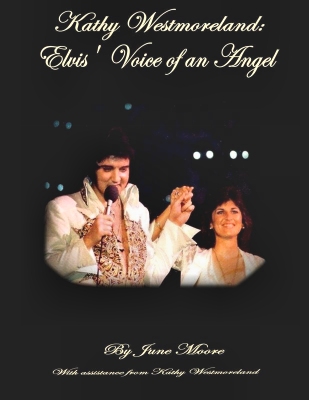 Replacing Millie Kirkham, Kathy Westmoreland toured with Elvis during his 70s concert tours. Before too long their on-stage relationship turned to romance. During the time Elvis dated Kathy he bought her several cars including a blue Continental Mark V.

A rather embarrassing incident occurred at the North Carolina concert on July 20, 1975 when Elvis introduced Kathy by saying “This Kathy Westmoreland our soprano singer, who doesnt like the way I introduce her if she doesnt like it, she can get the hell of the stage.”

Shocked! Kathy and two other singers walked off the stage in front of the audience. Later Elvis apologised and they became friends again, and remained so till his death.

In her revealing autobiography, “Elvis and Kathy”, she admits to falling in love with Elvis and sleeping with him. Noting that sex was involved. Her book also covered the fact that she, Larry Geller and Charlie Hodge were told my Elvis doctor, Dr Nickopoulos that Elvis was dying of bone cancer.

Today Kathy has her own fan club, a website, and about to release a CD of the songs recorded in 1978, to include the tribute single, You Were the Music and the song she sang at Elvis funeral My Father Watches Over Me.

Details and sound clips are available on all of Kathy’s CDs and DVDs,  as well as autographed photos, on her website: Kathy Westmoreland  or email: June Moore   for more details

Perhaps the most important time of year for Elvis fans everywhere, is the month of August, as our hearts and minds are focused on the greatest entertainer of the 20th century. This August, there’s been a little something added, as  Kathy Westmoreland, who stood beside Elvis both on and off stage for the last seven years of his life, released a two new CDs of songs that she & Elvis performed together on stage.  Chat with Kathy: Kathy Facebook

Kathy Westmoreland, who also dated and fell in love with Elvis, even wrote a book about it called “Elvis and Kathy.” And she’s got — we’re going to talk about Elvis’ passing away as well, and again I’ll get back to strange things about Elvis.  Kathy dated and fell in love with Elvis, wrote a book about their relationship called “Elvis and Kathy.” Why did you break up?  I dated him for about six months on a regular basis. Then it became obvious to me that there were other women. It just — you know how that is.

WESTMORELAND: He was fabulous. Oh, it was fun. He was very thoughtful. Almost motherly.

WESTMORELAND: No. He suffered from insomnia. He was very much — I think a lot of geniuses are like that, just can’t turn it off is what he would say.

WESTMORELAND: I miss him terribly.