In IT HAPPENED AT THE WORLDS FAIR 10 year old Kurt Russell is paid by Elvis’s character to kick him in the shins.  Little did we know that years later Kurt Russell would play Elvis in the movie “Elvis” and receive an Outstanding Lead Actor Emmy nomination for his portrayal. Russell was briefly married to his “Elvis” co-star Season Hubley with whom he had a son, Boston.

“How much more dangerous could a part be than playing Elvis Presley,” muses Kurt Russell about his three-hour performance in “Elvis” the first screen biography of the Kings death since his untimely death. What better role could anyone pick to blow away a career on?”

Indeed, it would be hard to come up with one. In addition to the usual phalanx of skeptical critics, will “Elvis” pass muster with Elvis family & fans? Especially those who arent getting a piece of the action. Mostly, to be considered are fanatical Elvis worshipers, who will quick to blow the whistle on any sacrilege towards their idol.

Kurt Russell in Elvis, as the film was simply called was broadcast on ABC-TV in he US in February 1979, to great acclaim. Although an edited version of the film had a limited release in British cinemas, and  then briefly appeared on video, it was abruptly withdrawn for legal reasons involving music rights…  Finally, after more than three decades, in the 75th anniversary of Presleys birth, Elvis is being released for the first time on DVD and Blu-ray in its unedited form.

Russell a former pro baseball player from Northfield Mass and long time Disney star is not overawed which is probably one reason he landed the role over almost 700 wager Elvis impersonators.

“The risk appealed to me, says Kurt as he curves his upper lip into an uncanny Elvis-like sneer. I figure it would be fun as nobody’s reaction to my acting bothers me. Except my own!

Kurt Russell talks Elvis Presley If Kurt is not preoccupied with the scrutiny the TV movie will get the people who made it are. It would be hard to find a more carefully selective script despite the fact that Tony Lawrence who produced the movie drew on an estimated 150 books and articles on the King. Perhaps Lawrence was concerned over legal repercussions from Presley father Vernon, ex-wife Priscilla or manager Colonel Tom Parker. What emerges in “Elvis” is a sanitized and at best incomplete view of the King of rock-n-roll.

For example the move ends in 1969 after Elvis comeback concert in Las Vegas. Left out is his problem with and divorce from Priscilla, his succession of affairs before and after his marriage, his loneliness, his drug abuse, his gun fetish and ultimately his graceless death at Graceland.

“I got some surprises,” he states defensively, “I think the audience will too. The whole point of the movie is to present a portrait of an Elvis most people didnt know and I think weve done that.”

Unfortunately these promises revelations turn out to be fairly trivial. One of the films disclosures is Presleys preoccupation with parapsychology. Another is his fear of assassinations. Neither suggests the qualities that made Elvis unique. Indeed Kurt offstage Elvis is so devoid of personality that when he takes the stage and suddenly erupts into manic gyrations the effect is incongruous the viewer. This is not Kurts fault, with his sideburns swagger and sexy pout he does make a convincing Elvis.

Russell put a prodigious amount of work into his role  watching videotapes reading articles and talking to such technical advisers as Larry Geller. Elvis former hairdressers Dave Presley his stepbrother and Charlie Hodge Elvis former rhythm guitarist who play himself in the movie. Russell was helped also by the fact that many of his lines were taken verbatim from Presley interviews. But since these are matters of public record they offer a ghostly accuracy without any insight. Russell displays more of a hot-blooded quality in his love scenes with Season Hubley who plays Priscilla. This is due in part to the real-life romance they ignited on the set.

Kurt deserves the vacation. He had put in 150 hours mastering the famous pelvic gyrations, practicing before his three sisters who are all Elvis fans. Kurt only mimes the songs whereas veteran Elvis impersonator, Ronnie McDowell does the soundtrack that does offer and understanding into the Presley mystique. He recalls, “Elvis was very energetic and high-spirited and took a real interest in me and my dad, Bing Russell who portrays Elvis father Vernon Presley in Elvis.”

Kurt remembers… the scene where he had to kick Elvis in the leg… “I wasnt happy doing that because I really liked him… then after I saw the movie I thought every fan will hate me forever.”  In a some what protective attitude, Kurt concludes “What eh hell Elvis gave us great entertainment  the least I can do is portray him sympathetically.” “….Its my way of saying thank you to the consummate entertainer of the 20th century.”

Kurt Russell began his career as a child actor when Walt Disney signed him to a ten-year contract. After that he pursued a career in professional baseball. He played second base for the minor league until injury forced him to retire. Kurts father Bing Russell, also a former baseball player who turned to acting, played the deputy sheriff on “Bonanza” for a number of years. Kurt Russell career include films such as Silkwood, Tango and Cash, Backdraft, Vanilla Sky and Overboard when he co-starred with Goldie Hawn. Today Kurt and long-time love, Goldie Hawn live in Vancouver where their son Wyatt is perusing career in hockey. Recently became grandparents when Hawn’s daughter, Kate Hudson, gave birth to a boy.

Elvis: The Movie, 1979. Although Kurt Russell doesn’t look much like Elvis in real life, he simply became him in this acclaimed tele-movie. He nails The King’s voice, personality, and demeanor. Elvis is told in flashback, starting with Elvis’ arrival in Las Vegas for what would be his 1969 comeback concert. It then works backward to show his awkward teen years, his discovery by Sam Phillips, his rise to fame, Army service, relationship with Priscilla (Season Hubley, who married Kurt shortly after working together here), and his frustration with his movie career. The story ends in 1969 so we never see Presley’s tragic decline or drug abuse.

Elvis also features Shelley Winters in a strong performance as his beloved mother Gladys, Kurt’s dad Bing Russell as Elvis’ dad Vernon, and Pat Hingle as his shady manager, Colonel Parker. Country singer Ronnie McDowell does an uncanny job of recreating Elvis’ singing vocals. Please note that the Elvis: The Movie available on DVD is NOT the original three-hour TV version but rather the two-hour European theatrical release. Kurt recently slipped back into the white jumpsuit for the Elvis-themed flop, 3000 Miles to Graceland. Vicky Tiu

After Kurt Russell now famous movie Elvis … yet another Elvis Presley movie are in the works. This time the Elvis movie is to be directed by Baz Luhrmann in Australia. 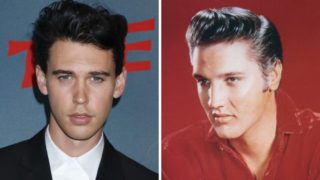 Director Baz Luhrmann has found his Elvis. He has set Austin Butler to play the starmaking role of Elvis Presley in the untitled drama that covers the seminal legend’s growth from dirt poor singer to global icon, seen through the prism of his complex relationship over two decades with manager Colonel Tom Parker… played by Tom Hanks

The film was shot in Queensland, Australia, with Warner Bros Pictures. The film will trace Presley’s elevation to a level of stardom and celebrity matched only by The Beatles, set against an evolving cultural landscape and loss of innocence in America.

So far the movie has not gotten very good review but being promoted hottly by the Presley family which means more dollars into the coffers for them.. Here is yet another publicity stunt for the movie. Baz certainly know how to promote a movie to the enth degree