Linda Thompson is breaking her silence and sharing her life, career and epic romances with two world-renowned stars, Elvis Presley and Bruce Jenner (now Caitlyn), in her new memoir, “A Little Thing Called Life.” From being Elvis’ girlfriend to marrying Bruce Jenner who transformed himself into  Caitlyn Jenner is a little disconcerting to look at her former husband in her new body, admits Linda Thompson now aged 65 I have to be honest and say it’s strange for me to see this beautiful woman, and look in her eyes, and think, ‘That’s the father of my children,’ ” Linda Thompson said. “That being said, I’m totally supportive of her and always have been.” Thompson, who dated Elvis Presley before marrying Jenner in 1981,

Thompson, who was married to Jenner for five years until their divorce in 1986, and is the mother of her sons Brandon, 34, and Brody, 32,  “I think it’s fascinating,” she says. “Of course, I lived it. We continue to be friendly. We’re not close friends, we don’t hang out. But, of course, Caitlyn is invited every time there is a family function. She has shown up a few times. It’s really kind of wonderful to see how all the kids have embraced her as a parent. She’s still a parent. She’s still a father.” Linda Thompson and Elvis on the Lisa Marie 1973

After Elvis and Linda split, Thompson married Olympic athlete Bruce Jenner in the 1980s. She married record producer David Foster but they divorced in 2005. Speaking of singers and songwriters, among the performers at the Junior League Event honoring songwriter Linda Thompson and her husband David Foster were Carole Bayer Sager and Tony Danza who started his career as a song and dance man.

David Foster a 14-time Grammy Winner and has written for such talents as Barbra Streisand, Michael Jackson and Neil Diamond. His wife, actress Linda, has also written lyrics for several gold and multi-platinum records, including the Academy Award-nominated “I Have Nothing,” recorded by Whitney Houston for the film The Bodyguard. 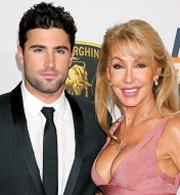 As the son of Olympian Bruce Jenner and pageant queen Linda Thompson, Brody Jenner lived in the lap of luxury as a self-described Prince of Malibu. Riches weren’t everything, however. After the couple ended their three-year marriage in 1984, the future Hills star rarely saw his biological father. “The way I see Bruce with Kendall and Kylie and Brandon, I’m actually so happy for them… I think Bruce is an incredible human being and I think that Bruce is an incredible father. He just wasn’t a great father to me.” confesses Brody Jenner

The Fosters have a special connection to children who have received organ transplants. Their Canada-based organization, the David Foster Foundation, has assisted 137 families from British Columbia with children in need of major organ transplants. The organization is a last resort for families who have no other means of financial support for non-medical expenses when a child must be sent to Vancouver–or out of the province–for medical treatment. The assistance can range from mortgage or rent payments during the time the family is away to the cost of day care for siblings left behind while the parents are with their sick child.  Since 1985, nearly 350 babies and young children have received the gift of life because of Dr. Bailey’s pioneering vision in the field of pediatrics heart transplantation. The survival rate at Loma Linda of nearly 80 percent continues to lead the world.

Elvis Presley reportedly spent the last five years of his life in misery trying to evade the paparazzi and hordes of fans who hounded him every where he went, revealed his ex-girlfriend, Linda Thompson. Former beauty queen Linda Thompson who dated Elvis said her life with Elvis was like that of two vampires.

“We literally were awake all night and slept all day. The world was turned around for him because he wasn’t free to go out among society…” Thompson, who is now married to songwriter David Foster, admitted that there were some terrifying times for the couple, when the paparazzi attacked them. ” They jumped on the car they were throwing themselves on the windshield. It really wasn’t safe for him to go out… In the five years I was with him we went to dinner one time and we sat there with guards around us and people ogling and watching every bite we ate…”

The latest entertainment project by Elvis’ former girlfriend Linda Thompson  ” The Princess of Malibu” will premiere on Fox Television Sunday, July 10th.   The synopsis of the reality show:14 time Grammy Winner David Foster struggles to kick out his two adult stepson’s, Brandon Jenner (23) and Brody Jenner(21), from his 22-acre mega mansion in the heart of Malibu  But the two boys, with the support of their mother Linda Thompson, are hell-bent on staying in the palatial paradise. Linda Thompson, The Princes of Malibu’ has filed for divorce from her husband and co-star, composer David Foster. Citing reasons that ”will remain personal and private,” Thompson, 55, stated, “It is important to remember that real life is not to be confused with art or entertainment.” 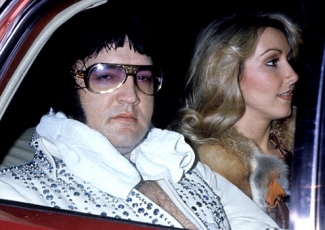 WHAT WAS YOUR FIRST IMPRESSION OF ELVIS?
Well, I was in the lobby talking to some of the guys and a few of the people who were hanging around and the door burst open and there was this vision. It was the middle of July in Memphis and it was very humid, just sweltering. He had on this black cape with a high collar and a red satin lining and I said “dressed a little like Dracula aren’t we?” so you see, we both shared a sense of humor that was very much like the other. We just hit it off immediately because we grew up in Memphis. We had the same religious beliefs. The same love for our family, devotion to mother and father. We had the same sense of loyalty, we enjoyed the same cuisine because we were both Southerners.

IT SOUNDS LIKE IT WAS ALMOST INEVITABLE?
Oh, it was. We shared a real kinship. I mean, we became kindred souls.  So much so that he said, “where have you been?” and I said “Growing up!”

ELVIS HAD JUST SPLIT FROM PRISCILLA WHEN YOU TWO FIRST MET RIGHT?
It’s funny because when we met at the Memphis Theatre, he was telling me that he’d just separated.  We met on July 6th and he had been separated since the beginning of January.

YOU MET LISA MARIE PRETTY SOON AS YOU BEGAN DATING. DID SHE ACCEPT YOU AS HER FATHER’S NEW PARTNER?
She was a wonderful little girl. She was very embracing and a little shy but I’ve always loved children and we got on really well. The first time I ever saw her was at the Monovale house and I was out by the pool. She kind of timidly came around and said hi. We started talking and we became really close. I loved being with her. You know, Elvis had a real childlike spirit and I have too. I like to do childlike things and to get down to a child’s level. She and I became very close.

I BELIEVE IT WAS LISA WHO TOLD YOU OF ELVIS’ DEATH?
She called me. She was only 9-years old but she had the presence of mind to call me and tell me what had happened.

WAS IT REALLY A SHOCK TO YOU OR DID YOU SEE COMING?
You know, even if someone who you know is on a destructive path, even when they finally pass away, it’s always shocking. Yes, it was a shock.  Graceland Designed by Linda Thompson