Born 1 February 1968 – Lisa Marie Presley Turns 51 years old today Only daughter of Elvis Aaron Presley and Priscilla –  Born February 1, 1968 under the Star Sign Aquarius – Name: Lisa Marie Presley (had she been a boy she would have been named John Baron) Birthplace: Memphis, Tennessee 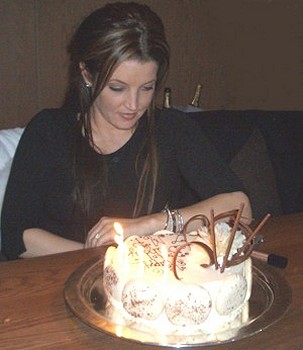 Treated to a life of luxury at the 14-acre Graceland estate in Memphis, Tennessee, life was still hard for young Lisa Marie. Her father’s fame and drug abuse made an impression on her. At the age of five, Lisa Marie saw Elvis and Priscilla go through a very public divorce. Her mother subsequently won custody over her, though Elvis saw her frequently and never stopped lavishing her with gifts, which included jewels, meetings with celebrities like John Travolta, ponies, and even a golf cart in which she famously rode around the grounds of her father’s estate with. 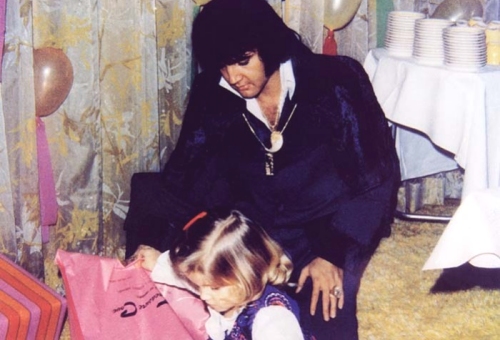 Lisa Marie, then only nine years old, was at the house when it happened and, to escape the madness that ensued, took refuge in her golf cart. Months later, it was revealed that Elvis had left his entire estate to his only child, Lisa Marie, to be taken over when she turned 25. Although her mother Priscilla Presley initially tried to protect her from the media, Lisa Marie could not escape and for years retreat into her shell in order to find some peace and solitude. At 25, her father’s Will was altered so that she would take control of the funds on her 30th birthday.

Lisa Marie’s late adolescent years were filled with partying, drugs and alcohol. Only after constant pressure by Priscilla did the Lisa Marie finally relent and at age 18 went through Scientology’s Purification program (Travolta – her childhood hero – introduced her to the church) After rehabilitation, Lisa Marie’s love life took off. In 1988, she married musician Danny Keough and had two children: Danielle Riley and Benjamin Storm.  The marriage lasted five and a half years and, of her three husbands, Danny remains Lisa Marie’s best friend.

A mere 20 days after her split with Keough, Presley married Michael Jackson in the Dominican Republic, in May 1994. They had been friends for a long time (Lisa Marie actually first met the Jackson when he was touring with the Jackson 5 – Elvis introduced them) they lost touch and then reconnected. Thanks to a highly watched TV  interview with both Presley and Jackson as well as a very public kiss at MTV’s Video Music Awards, their marriage became the focal point of tabloids throughout its short life. Though she swore that she was at one point madly in love with him, Presley eventually could not take the marriage anymore and filed for divorce in January 1996.

When Lisa Marie turned 30 and became one very powerful businesswoman after taking over Elvis Presley’s $150 million estate, the media did not cut her much slack. Her engagement and subsequent breakup with John Osasco and then romance (and brief) marriage to Nicolas Cage in 2002 were popular news stories.

When Lisa Marie was three years old she learned the words to Elvis’s songs, “Sweet Caroline” and sang it for her father. Elvis told her that he wanted to record her on tape. Lisa sang full blast and even mimicked some of her fathers stage moves. Elvis loved her little voice and thought she would be a great singer one day… Lisa Marie learned the words to Elvis’s songs by playing his records on her on her own portable record player. When she had the song down pat. She’d run into her father’s room, take him by the hand, and say, “Daddy, sit down. I want to sing you our latest song!” She’d sing as loud as she could, making Elvis laugh and cry at the same time.  Latest Photos of Lisa Marie Twins