Lisa Marie Presley Latest News – Lisa Marie Twins – Lisa Marie Presley, inherited his US$100m estate in 1993 at the age of 30. Another 25 years later, she says in a lawsuit that she is down to her last US$14,000. Presley blames her former manager Barry Siegel for her precarious finances, and filed a suit last week against him accusing him of “reckless and negligent mismanagement” of her inherited estate. Siegel sold 85% of her share in Elvis Presley Enterprises in 2005, a deal that he says “cleared up over $20m in debts Lisa had incurred and netted her over $40m cash and a multi-million dollar income stream”. Presley says it lost her millions thanks to a subsequent investment in Core Entertainment, the company behind American Idol that went bankrupt in 2016. Siegel, has counter sued Lisa Marie Presley for non-payment of US$800,00 fees owned to him and stated… “It’s clear Lisa Marie is going through a difficult time in her life and looking to blame others instead of taking responsibility for her actions…”

Lisa Marie Presley is appearing in court Tuesday morning to battle her estranged husband for custody of their children. Presley showed up to the Los Angeles courthouse wearing a black suit, dark sunglasses and looked upset. Her estranged husband, Michael Lockwood, also showed up as he prepares to fight for custody. The courtroom has been closed off from everyone except the two parties, as we’re told Presley will most likely take the stand and the judge is trying to keep matters private, for the sake of the children.  Lisa Marie has been seeking primary custody of her two daughters, Harper Vivienne Ann and Finley Aaron Love, who she had with Lockwood. The girls were previously under protective custody as part of a dependency court order. That order has since expired and she has been making the push to win back custody ever since.

Lisa is reportedly clean and sober now and after completing her rehab program has retained custody of the twins.  But Lisa’s battles are  not over.. she is  gearing up for one nasty  divorce battle with ex Michael Lockwood… and is willing to go to any extremes to prove Lisa wrong and get his fair share from the divorce. Not only does Michael plan to fight Lisa for custody of the twins he also has a few other demands he would like the judge to grant. He wants Presley to pay not only the legal expenses he also wants at least $40,000 a month in spousal support. Now that Lisa Marie has been linked to a possible new love interest with Billy Corgan her  ex will most likely try to use it against her. Lockwood is privy to all Lisa Marie secrets  afters  ten years  they were married… Time will reveal how far Lockwood will go to get his demands met? Lockwood has revealed he go to any extreme to win.  Lisa and Michael are due in court late February 2018. Lisa Marie Presley  arriving at the home of her mother Priscilla with her oldest daughter Riley Keough. The two were seen getting out of Lisa’s black Cadillac, at which point they were mobbed by twins Harper and Finley who ran to  hug their mother as soon as they spotted her and big sister Riley 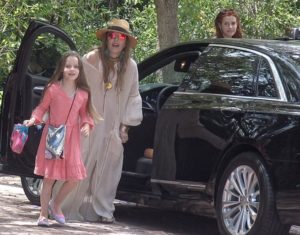 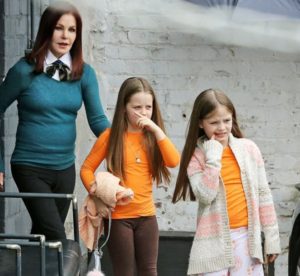 Finley and Harper have been living with Priscilla in her Beverly Hills home ever since Lisa’s custody battle with Michael Lockwood turned ugly in February. Lisa meanwhile has reportedly been living with her daughter Riley and the actress’ husband Ben Smith-Petersen. Lisa Marie Presley had reason to rejoice last week, as the mother-of-four enjoyed a day out with her three girls after a difficult few months. The meeting marked one of the very few occasions that the 49-year-old Lisa Marie has seen her twin daughters Finley and Harper since they were sent to live with Priscilla Presley in February after Child Protection Services decided in the aftermath of that filing to take the girls away from both parents and agreed that they could live with their 71-year-old grandmother. “The girls have not been in foster care and never will be… and will be until all this is sorted out” said Priscilla

Lisa won a major victory in the ongoing divorce back in February when Lockwood’s request for spousal support in the amount of $40,000 each month was denied by the judge. Lockwood ordered Lisa to hand over a monthly payment of $10,000 for five months to cover her estranged spouse’s legal fees, which the court ruled would be the only expense the heir to Elvis’ vast fortune was required to pay.    How Much is Lisa Marie Worth ??