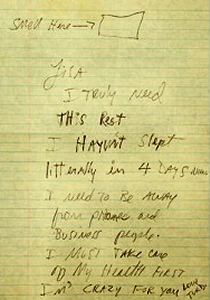 Written  between 1993 – 1996 the letter had been slated for auction and had been expected to fetch up to $1,200. However Lisa Marie Presley complained to Juliens Auctions, and the letter was taken off the auction block.

Lisa I truly need this rest I havent slept literally in 4 days now. I need to be away from phones and business people. I must take care of my health first I’m crazy for you… Signed, love Turd… Michael Jacksons nickname.

Michael Jacksons Concert Promoter Found Not Liable in Wrongful Death Case The jury in the wrongful death suit filed by Michael Jacksons mother against the concert promoter A.E.G. Live found the concert promoter was not negligent in hiring Dr. Conrad Murray to serve as Jacksons personal physician for his comeback tour. Dr. Murray was convicted of involuntary manslaughter for giving Jackson an overdose of anesthetic propofol in 2009

From their very first date, at a dinner party staged by a mutual friend, Michael and Lisa hit it off. Raised in Graceland, she had much in common with the world’s most famous pop star, cloistered away in Neverland. Both had been sheltered from the real world, missed out on their childhoods and were mistrustful of outsiders. They believed they were soul mates.

Michael was openly flirtatious, and Lisa was impressed by his private candour and normality. As they talked, she began to feel she was seeing the real Michael, the man behind the mask. His sexuality, admittedly, still seemed ambiguous, but he was soon kissing her fairly passionately. She was certainly attracted to him. Lisa liked strange guys, with an edge. And who had more of an edge than Michael?

‘Yes, I started falling for him,’ she explained. ‘I wanted to help him, and I felt that I could.’ As he spiralled into drug addiction, she stood by him. During one of their phone calls, he wanted to know how she would respond if he asked her to marry him. It could have been a joke but, without missing a beat, she replied: ‘I would do it.’

A silence followed until Michael said: ‘Hold on, I have to use the bathroom.’ When he came back on the line, he acted as if everything was settled. Lisa was his fiancé. ‘My love for you is real,’ he told her. ‘Please believe me.’

At Neverland, the two walked hand in hand and then kissed at the top of the Ferris wheel. She slept with him in his bedroom. For Michael, it was the first time he had experienced such chemistry with a woman, or with anyone. He seemed unable to contain his laughter. ‘I’ve never known a person like her,’ he said.

He and Lisa appear to have had an intense and active sex life. She told a friend that he was ‘hot stuff in bed’ and ‘amazing’ – and she should know, the friend added, because ‘she’s been around’. Nevertheless, some of his habits were a little odd. ‘Michael liked her to wear jewellery in bed. They were into role-playing games, although Lisa would never say who was playing what kind of role.’

‘The first time, she went to turn on the lights afterwards, and he leapt out of bed and ran into the bathroom so she wouldn’t see his body. He emerged 20 minutes later, in full make-up and wearing a silk robe. Then they went at it again.

They were married at a secret ceremony in the Dominican Republic in May 1994, with no family or friends present. Priscilla Presley, Lisa’s mother, was furious, convinced that Jackson was using her daughter to improve his image after the Jordie Chandler affair.

‘Can’t you see what he’s up to?’ she asked. ‘It’s so obvious.’ In fact, Jackson had an entirely different agenda. The man who had previously been adamant that he had no interest in procreation was desperate to have children.

The Chandler business had hurt him deeply, leaving the gnawing, empty space in his heart more terrifying than ever. He was determined to ‘start living’, he insisted, falling in love with a woman, marrying and having children of his own. He told me at the time: ‘I love Lisa. Why won’t people believe that? Why won’t people let me be happy?’ 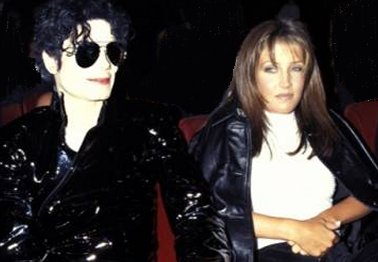 When Lisa didn’t become immediately pregnant, he expressed his disappointment. ‘I thought we’d be expecting within a couple of weeks of making love,’ he said. ‘Lisa says it takes time, but I don’t have time. I want it to happen now. I want children so badly.’

Meanwhile, Lisa was realising that her mission to save Michael was not going to be easy. She was amazed by his emotional repression and felt he was resisting her efforts to help. Perhaps, she pondered, he rather enjoyed wallowing in his own pain, playing the victim. He was ‘like a young boy, angry at the world’, one of her friends noted, and his self-pity became a strain on the relationship. ‘She had no patience at all with the lost childhood routine. “Who hasn’t had a miserable childhood?” she would say.’

Throughout their marriage, she never saw him without his make-up. When they slept together, in the morning she’d find his pillow smeared with it. ‘Lisa would try to surprise him by waking early and tapping him on the shoulder,’ a friend recalled. ‘He would shriek “No, don’t look!” and scamper to the bathroom.’

Other aspects of his behaviour alarmed her. She did not believe that he was a paedophile, but it concerned her that he had not learned his lesson from the Jordie Chandler affair and still chose to spend time with young boys. She squirmed as she sat beside him during a TV interview, when he was adamant he was going to continue having boys come to his home for sleepovers.

It was after this that things started going bad. One of Lisa’s friends said: ‘The great sex continued but when they weren’t in bed making love, they were fighting. Lisa started to wonder if she’d made a mistake in choosing him as a life partner.’

What finished off the marriage was the issue of children – and it happened, in true Michael Jackson style, in the most bizarre of ways. He had one grown-up friend, Debbie Rowe. She had been a ‘biker chick’ in black leather when she was younger, swore like a sailor, drank beer and tequila and, despite having wealthy parents, was always penniless. She was the nurse at his dermatologist’s, and he had met her ten years earlier when his skin first came out in mysterious blotches and he was certain he had skin cancer. He had been in touch with her again after he bleached his scrotum with a special cream and it burned him. Debbie attended to him, and to show his gratitude, he gave her a car.

By September 1995, Michael was still pushing Lisa to get pregnant. She, however, was reluctant – sensing that the marriage was doomed. ‘When I imagined having a child with him, all I could ever see was the custody battle nightmare,’ she said later.

Their physical intimacy had cooled. ‘I think we have to have sex in order for me to get pregnant,’ she told him, ‘and I ain’t doin’ it.’ But Michael didn’t mind. He had a plan. One day over breakfast, he told Lisa: ‘My friend Debbie said she will have my baby. If you won’t do it, then she will.’ Lisa was stunned. Life with Jackson had been weird from the start, but this was too much. She called his bluff. ‘That’s fine with me,’ she said in controlled voice. ‘Tell her to go ahead and do it.’ 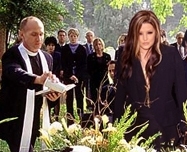 Michael got his way. Debbie would bear him two children, though whether they were ever intimate or underwent artificial insemination was never known for sure. What was without doubt was that there was no future for him and Lisa. It had been the most improbable of marriages and it ended in divorce. Michael was deeply upset. Never before had he felt uninhibited and physically intimate with anyone.

Despite the maddening friendships with boys and all of the rest of his eccentric behaviour, he was still a human being with emotions, feelings and a beating heart. And Lisa Marie Presley had been the one to truly touch it. In the end, there was no police prosecution. Not one witness came forward to corroborate Jordie Chandler’s story or to make similar accusations, and without other witnesses the case was weak.

Perhaps Michael had the undying loyalty of the youngsters with whom he’d had sex. Or, maybe, conceivably, he was innocent. The issues were never aired in court. A civil case against Jackson was settled out of court with a $20million payment to Jordie. It was not, Jackson’s people emphasised, an admission of guilt but simply to draw a line under the whole tawdry affair. In 2005, Michael Jackson stood trial on a series of child molestation charges involving young boys and was acquitted on all counts. Lisa Marie Marriages  Leaving Neverland