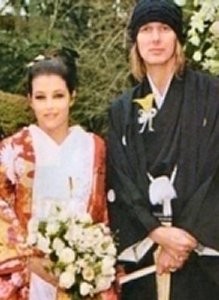 Lucky Priscilla Presley insisted that Lisa Marie signed a 952 million dollar Pre-Nuptial agreement before she wed the fourth time to Michael Lockwood. Despite the signed Pre-Nutial Agreement  Lisa Marie Presley has been ordered by the court to shell out $10,000 a month to aid in Michael Lockwood’s legal expenses. The payments begin on the 15th of each month for the next five months.

Lisa Marie eight-year-old twins with Lockwood, will not have to pay spousal support to Lockwood for the time being, though the legal papers indicate that the court “retains jurisdiction” to order Presley to retroactively pay child support, if it’s determined that a waiver of spousal support contained in a 2007 post-nuptial agreement between Presley and Lockwood is not valid.

The estranged husband of Lisa Marie Presley hit back at allegations that he held “disturbing” images of children, calling the accusations unproven and malicious. Lockwood, a musician, was accused by the daughter of Elvis of having illegal images on his computer. Her divorce from Lockwood has now become a battle for money, with Lisa Marie claiming that she has little of her $100 million inheritance left, and Lockwood seeking spousal support.

Elvis Presley was 4th on Forbes list of the top-earning dead celebrities – earning $US35 million in 2017, 40 years after his death. However, at the time of his death, Elvis’ fortune had dwindled to $5 million. On her 25th birthday in 1993, Lisa Marie inherited her father’s estate, which, thanks  to the stewardship of her mother, Priscilla, had grown to an estimated $US100 million. Lisa Marie was owner and chairman of the board until 2005, when she sold 85 per cent of the estate’s business holdings, excluding his expansive property Graceland, which she kept. Lisa Marie receives $466,000 a month [$15,500 per day] or [$5.6 million a year] from the trust Elvis set up for her before his death in 1977.  She sold part of the lavish Memphis estate last year for $136m   SALE OF GRACELAND

Lisa Marie Michael Jackson Story  Lisa  Marie  was desperate to protect her fortune after three previous marriages failed. Lisa married Michael Lockwood, in a lavish $340,000 Japanese ceremony January 22, 2006 but insisted on the pre-nuptial agreement in case the union fails… which it did.Until MLockwood not one of her previous three husbands attempted to lay claim to inheritance…  Photos of all Lisa Marie Weddings