Elvis Mother’s Day Gift The Mother’s Day gift Elvis never had the chance to give his mother On the second Sunday in May, children treat their mothers to something special. It is the one day of the year when children, of all ages, show their appreciation 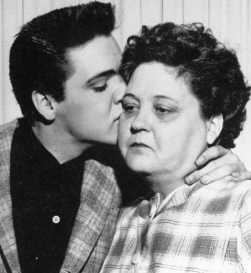 lvis most important woman in Elvis’ life was his beloved mother Gladys Love Presley England was the first country to set aside a day to recognize mothers. In the 18th century when many people worked as household servants “Mothering Sunday” was reserved for them to return home to be with their mothers. In USA, Mother’s Day became an official holiday in 1915 Elvis and Gladys

19 December 1957: Elvis received his draft notice at Graceland. That Christmas Elvis gave Anita Wood a French poodle and his mother a pink dressing-gown, but no gift could alleviate the pain she felt.

25 March 1958: Elvis was given an Army haircut at Fort Chaffee, Arkansas by James Peterson while a mass of press photographers snapped the historic moment. Elvis joked, “Hair today, gone tomorrow.

28 March 1958: During basic training Elvis his mother Gladys every night telling her he was homesick. While playing football Elvis broke is littler finger on his left hand, claiming, “.. it didn’t hurt bad.”

5 August 1958: Gladys was taken to Memphis Methodist Hospital. Elvis was granted a leave of absence and rushed to his mother’s bedside.

14 August 1958: Gladys Love Presley died of a heart attack in Room 688 Elvis went into a state of shock. He became so distraught that the funeral directors had a difficult time to tear Elvis away from his mother’s body. He combed her hair over and over and insisted she be placed in a glass-topped casket so that he could continue to see her.

16 August 1958: Elvis was overwrought at his mother’s funeral at Forest Hill Cemetery. Gladys’ favourite gospel quarter sang Rock of Ages, In the Garden, “I am Redeemed and Precious Memories. After the funeral Elvis locked himself in Gladys’ bedroom for eight days barely eating and refusing to talk to anyone. Weeks later a marker was placed at the grave site that read.