Muhammad Ali & Elvis. Throughout the years it seems that every celebrity, actors, presidents, authors, singers and sportmen wanted to meet, greet and have their photo taken with Elvis Presley just like boxing great Muhammad Ali 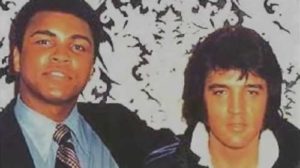 In 1967, citing religious beliefs, Ali refused induction into the U.S. Army at the height of the war in Vietnam. (Unlike Elvis who was enlisted in the army in1958 and demanded by his manager Col Parker not to offer any objection … which Elvis had every right to do … under the sole child and sole provider of his family law) This refusal followed a blunt statement voiced by Ali 14 months earlier: “I ain’t got no quarrel with them Vietcong.”

Many Americans vehemently condemned Ali’s stand. It came at a time when most people in the United States still supported the war in Southeast Asia. Moreover, although exemptions from military service on religious grounds were available to qualifying conscientious objectors who were opposed to war in any form, Ali was not eligible for such an exemption, because he acknowledged that he would be willing to participate in an Islamic holy war.

Ali was stripped of his championship and precluded from fighting by every state athletic commission in the United States for three and a half years. In addition, he was criminally indicted and, on June 20, 1967, convicted of refusing induction into the U.S. armed forces and sentenced to five years in prison. Although he remained free on bail, four years passed before his conviction was unanimously overturned by the U.S. Supreme Court on a narrow procedural ground.

Ali’s later years were marked by physical decline. Damage to his brain caused by blows to the head resulted in slurred speech, slowed movement, and other symptoms of Parkinson syndrome. However, his condition differed from chronic encephalopathy, or dementia pugilistica (which is commonly referred to as “punch drunk” in fighters), in that he did not suffer from injury-induced intellectual deficits. 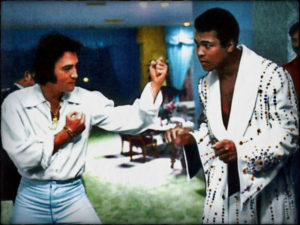 “People don’t realize what they had till it’s gone. Like President Kennedy, the Beatles, there will never be anything like them. Like my man, Elvis Presley. I was the Elvis of boxing…” Muhammad Ali

Elvis in the Army