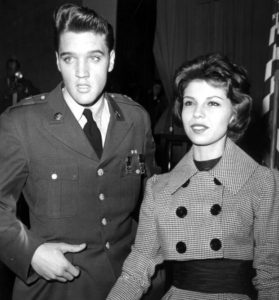 Nancy Sinatra Welcomes Elvis Home – Sinatra Welcomes Elvis Home from Germany 1960Nancy Sandra Sinatra (born June 8, 1940) singer, actress and daughter of Frank Sinatra, and is best known for her 1966 signature hit These Boots Are Made for Walkin’. Nancy’s other hits include the 1967 number one Somethin’ Stupid (a duet with her father), the title song from the James Bond film ‘You Only Live Twice’, several collaborations with Lee Hazlewood, and her cover of Cher’s Bang Bang (My Baby Shot Me Down) (lyrics and music by Sonny Bono), which features during the opening sequence of Quentin Tarantino’s Kill Bill. 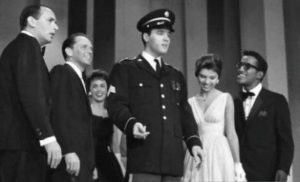 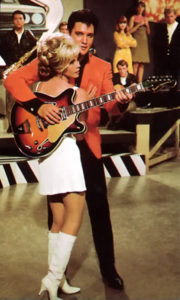 SPEEDWAY 1968 Elvis is a generous NASCAR race car driver with a heart of gold who feels compelled to bail friends out of financial hardship. However, Steve’s manager (Bill Bixby), a compulsive gambler, had been mismanaging Steve’s winnings to support his gambling habits, landing Steve in deep trouble with the IRS for nonpayment of back taxes. Walk in Nancy Sinatra as the IRS agent assigned to keep tabs on Steve and apply his future prize money toward his $150,000 debt, but she ends up taking a romantic interest in him as well.